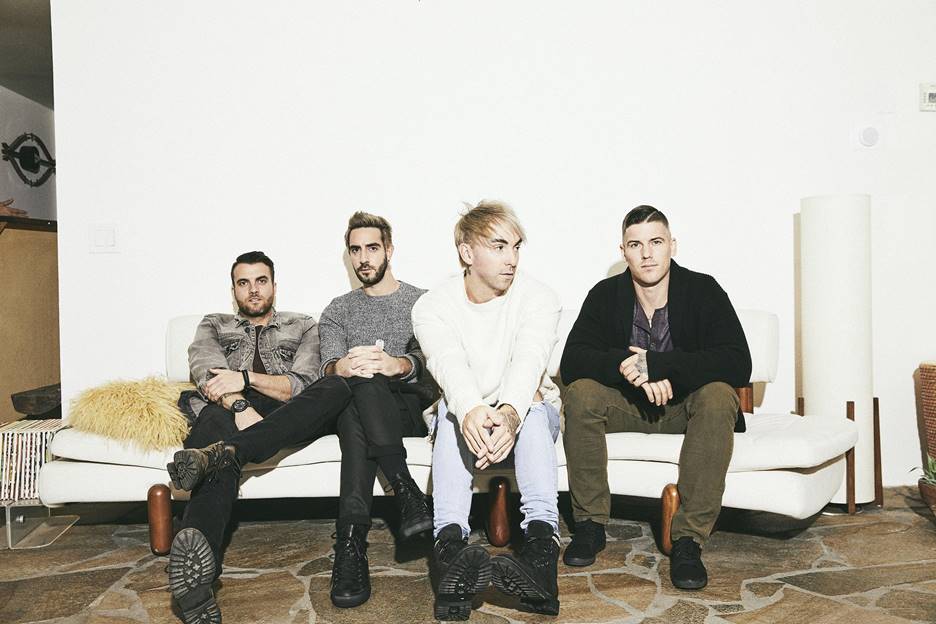 Fueled By Ramen band All Time Low has surprised fans with the Saint Patrick’s Day release of "Getaway Green", the third track off their forthcoming full-length album Wake Up, Sunshine.

The eagerly anticipated song, which saw its live debut at last year’s Slam Dunk Festival, is available to stream and download HERE. All Time Low has also released an official music video for the track, recorded live at intimate shows in Boston, New York, Baltimore, Leeds, and London this January.

Wake Up, Sunshine is due for release on April 3rd via Fueled By Ramen, and is available for pre-order HERE. Fans who pre-order the album will receive instant downloads of "Getaway Green" as well as previously released singles "Sleeping In" and "Some Kind Of Disaster". Exclusive pre-order bundles including vinyl and the band’s very own RISE Brewing Co "Wake Up Sunshine" Nitro Cold Brew Coffee are available in the band’s webstore HERE. All Time Low will celebrate the release of the album with a performance on ABC’s Good Morning America on Friday, April 3rd.

All Time Low began building anticipation for Wake Up, Sunshine with the January release of "Some Kind of Disaster" alongside an official music video. Within a month, the song clocked over four million streams with E! News attesting "the pop-punk band returns with this introspective track and a whole new outlook." Billboard added, "‘Some Kind of Disaster’ begins the next era for All Time Low."

Last month, the band returned with the LP’s second single, "Sleeping In," which debuted on Scott Mills’ BBC Radio 1 show, and is available now on all streaming platforms. The band also released a Max Moore directed official music video for "Sleeping In" and partnered with North Shore Animal League America(NSALA) to help raise money and awareness for no kill rescue and adoption organizations. Fans can donate to NSALA HERE and stream the official video – which was shot on location in Nashville, TN at NSALA shelter partner, MACC – HERE.

The group went back to the basics (and the basement) for Wake Up, Sunshine. Throughout 2019, the four musicians-Alex Gaskarth [vocals, guitar], Jack Barakat [guitar, vocals], Zack Merrick [bass, vocals], and Rian Dawson [drums]-congregated together in Nashville at Rian’s studio and at a Palm Springs rental house. Face-to-face, they wrote and recorded the 15-song affair joined by co-writer, producer, and collaborator Zakk Cervini.

"We got back to how we started," commented Alex. "It had been a long time since the four of us made a record under one roof. That became a central theme. We’ve been a band for 17 years. Everybody brought something to the table. A lot of what you’re hearing came from those magic moments together." Jack concurred, "I think we accomplished something special. By putting our four heads together, we were able to make a classic All Time Low album."

This Summer, All Time Low will headline the 2ndannual Sad Summer Festival (presented by Journeys). This nationwide trek will also feature The Story So Far, Movements, The Maine, Grayscale, Yours Truly, and Destroy Boys, and is set to kickoff July 17th in Sacramento, CA. Tickets for the eighteen-city summer tour are available now. For tickets and more information, visit www.alltimelow.com / www.sadsummerfest.com.

7/24 – Orlando, FL – The Orlando Amphitheater at the Central Florida Fairgrounds

ABOUT ALL TIME LOW

Throughout a catalog streamed nearly half-a-billion times and highlighted by two gold albums, two gold singles, and a platinum single, All Time Low have continually raised the bar for both pop and punk. Since 2003, the group has notched five straight Top 10 entries on the Billboard Top 200, spanning the gold-certified Nothing Personal [2009], Dirty Work [2011], Future Hearts [2015], and Last Young Renegade [2017]. The latter attracted tastemaker acclaim from the likes of Rolling Stone, Paste, and more as the band canvased the world, headlining arenas on three continents. 2019 saw All Time Low celebrate Nothing Personal with a string of sold-out anniversary shows and a documentary following the band as they revisited the album at RedBull Studios. The record’s influence remains prevalent with Rock Sound citing its impact on Fall Out Boy, 5 Seconds of Summer, and more. After nearly two decades together, All Time Low have rekindled the spark they first ignited in a Baltimore basement on their 2020 full-length studio album, Wake Up, Sunshine. These four lifelong friends walked into a tiny room, plugged in, and turned up with the same spirit, but with more experience, and proficiency gained from performing to millions worldwide. As a result, they‘ve delivered Wake Up, Sunshine, a captivating body of work at the apex of pop punk prowess.

CONNECT WITH ALL TIME LOW: