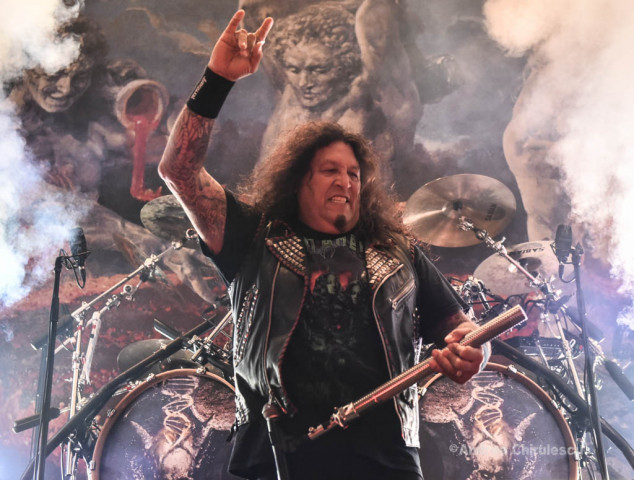 The attendance for the Exodus, Death Angel and Testament concert the 8th of February was massive. Few missed the chance to see three awesome big thrash acts in a row. These bands are usually a part of major festivals’ line-ups and oftentimes play at the same time as other big names so it is always great to be able to see them in one night. Testament had already played in Oslo at Tons of Rock and that was also a success. The three bands have not only established a name but each its own style within the genre.

I think to experience these legendary bands live is awesome. The performance of bands of this caliber always stand out and these musician seem to still have lots of energy. I really like the performance of the guitarists that bring memories from other great performers who preceded them. It was a pretty energetic show just as you would expect from a thrash gig, it even had a wall of death included. It is not often you see that in Oslo. Some attempts to move the crowd have been made before at the Inferno Festival. I remember Origin attempted to make a wall of death, but I think thrash fans responded far better this time than the predominantly Black Metal crowd at Inferno then.

Since there was no opening act it meant the concert started right away with my favorite band of the night and that’s Death Angel. I managed to get a good place to see the whole performance without problems because even though it was sold out there was still enough space. Death Angel’s setlist consisted mainly of songs from recent albums.They are also promoting their latest album Humanicide so we got both the same-titled song which has epic opening riffs and other one called Aggressor.

From the great vantage point I had I could enjoy the performance of these thrash legends. I feel pretty lucky l that I had the opportunity to see Exodus on this tour because they are not going to tour Europe this summer since they are going to focus on writing their upcoming album which promises to be an awesome one since this is going to be Gary Holt’s main endeavor since there seems that there will not be any duties with Slayer in the foreseeable future.

Testament’s setlist had a variety of classics and newer plus some exclusive features like the live debut of Last Stand from Independence from the album Dark Roots of Earth, as well as the guest vocals of Exodus’ vocalist Steven Souza in Over the Wall.

Together with classics like Practice What You Preach, Into the Pit, Careful What You Wish For and Fall of Sipledome. As well as newer songs like Brotherhood of the Snake and The Pale King. We even got a the live debut of their latest single called Night of the Witch which was pretty good and is taken from Testament’s upcoming album called Titans of the Creation that is going to be released later in April this year.It was an awesome concert in spite of minor sound problems.

Full photo galleries from the evening

ABISME – As Fear Falls In