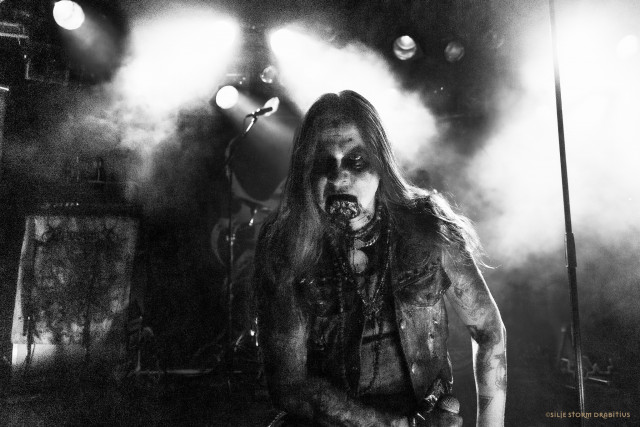 The last time I saw Endezzma was in the middle of nowhere in Sweden on a stage that had considerable sound problems and on daytime, but now under improved conditions in Oslo the show was much better. The kind of Black Metal that Endezzma plays is pretty rhythmical, and can turn a bit thrashy especially when it comes to songs from Erotik Nekrosis. Endezzma’s sound is pretty enjoyable and gives a good live experience. They are well established and play often abroad. This time they played songs like Sick Kulta Lucifer, Gates of Mephisto, Serpent Earth. In addition, they had special guests for their usual tribute to Nefas, this time it was Mannevond, Enzifer and Hoest. They played Satanic Black Metal in Hell which is truly fit for a Black Metal party indeed and was the perfect warm-up for the awesome Taake show to come. Their new album that will be released sometime in 2020 is absolutely something to look forward to.

I was lucky enough to see Taake’s Nattestid Ser Porten Vid being performed in its entirety that night. That concert being a part of the celebration of the 20 anniversary of the album. This special performance has already been a part of other festivals like Beyond the Gates, Bloodstock and Throne Fest. I think Taake’s old albums are simply beautiful and it is a pleasure to see them being performed live. I mean everything non-music and drama related just fades away when you get to see the awesome guitar work that has such a beautiful composition. The melodies will withstand the test of time for sure. I’m pretty glad that in spite of the venue being sold out there was plenty of space. Lots of fans from different countries attended and there was an Inferno days kind of feeling.

The contrast between songs from Nattestid and other newer songs like Fra Vandested til Vaadesmed is always interesting to see. It’s a brief live display of how the sound and composition has evolved throughout the years. Of course the biggest contrast is the now familiar The Cure cover that counts with the guest performance of Daniel Vrangsinn. Now I was actually prepared for it. It didn’t came as a bizarre surprise so I got to think about Daniel’s presence there that is almost like a statement. But still I would have preferred it all to be old days oriented-if I were to choose-because the cover abruptly interrupts the cherished atmosphere that Black Metal creates. But anyway I feel privileged and lucky to get to witness such a happening all things considered.

MARILLION – Marillion with Friends from the Orchestra