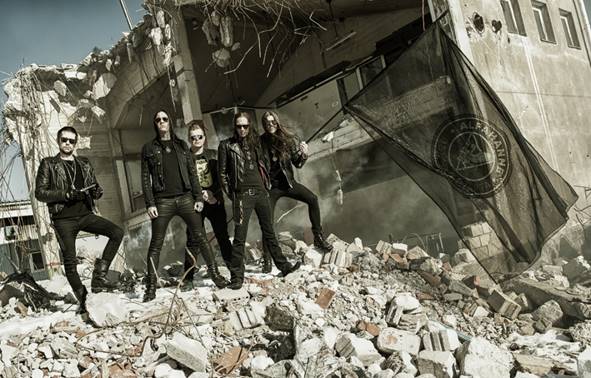 Swedish rockers Alfahanne will release their new album titled "Atomvinter" (Eng.: nuclear winter) on Oct 4th via Indie Recordings! Alfahanne are unique with their Alfapocalyptic dark and chilling rock and will make your head and foot move while causing shivers down your spine at the same time. There are no happy endings, no good news and the world is in ruins. With the very suitably titled new album, the Swedes have once more covered the earth in black smog. And we are thrilled!

When Swedish rockers Alfahanne burst onto the scene in 2010 it was with minds determined to bring back the danger to rock ‘n’ roll.  With the considerable experience they had gained over a couple of decades with other bands and playing what they themselves call "Alfapocalyptic Rock", a mix of Black Metal, Classic Rock, Punk, Goth and, of course, good old rock ‘n’ roll, Alfahanne have created their own unique, high-octane style of music. A style that has earned them plaudits from critics and built them a considerable and ever-increasing fan base.

The five horsemen of the Alfapocalypse are back with their fourth journey towards total extinction, towards nothing at all. The death cult known as Alfahanne will take the listeners deeper into that never-ending void than ever before. Atomvinter gives you 9 tunes filled with blazing guitars, chanting vocals and danceable beats. A masterpiece.
Along the way they have joined forces with equals such as Hoest and Nag to form an alliance strong enough to bring down the world once again. The circle is complete, the clouds are gathering, everything that lives will die!