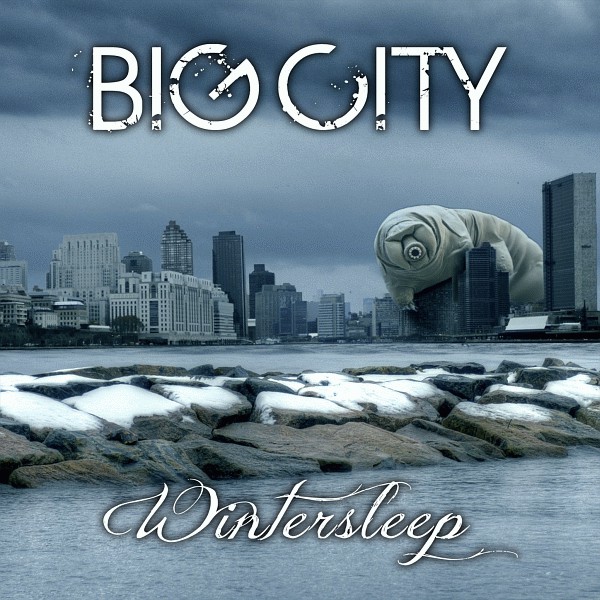 On their excellent debut, the Norwegian melodic hard rock/metal act combine the best of Def Leppard, Bon Jovi, Van Halen, White Snake, The Scorpions and other hard’n’heavy likes for beautifully written and expertly executed time travel back to the times where rock and metal were both one and ubiquitous.

We continue the Daniel Olaisen series, having temporarily left his death metal stylings of Blood Red Throne and thrash/groove of Zerozonic to focus on the project which shows this amazingly talented and skilled guitarist in the fullness of his prowess – Big City. The Greek label Rock Of Ages released Big City’s second album, "Big City Life" in 2018 as a double CD along with the, this here, debut "Wintersleep", and it is this double-album which Daniel was so kind to send me a physical copy of, whereby two separate reviews follow, in order of release.

As far back as in 2009, somewhere between working on Blood Red Throne’s "Souls Of Damnation" and Zerozonic’s "God Damn, Better, Best", Daniel began to put together ideas to combine hard rock stylings such as Def Leppard, Dokken, Bon Jovi and Van Halen with heavy metal of Iron Maiden, Judas Priest and Megadeth. He already had the second guitarist – former bandmate, Frank Ørland, with whom he played in the prog/thrash/heavy metal band Scariot (1999-2005) before forming Blood Red Throne. Frank Nordeng Røe (Circus Maximus session drummer) and Geir Inge Olsen (session bass guitar) were both found on the internet while vocalist Jan Le Brandt, thanks to a friend’s tip. Having formed Big City, the quartet recorded "Wintersleep" with Martin Berger (Screams Of Scarlet, Blood Red Throne, Zerozonic) at Skar Production, and the album was quietly released digitally via Mayhem Records. Meanwhile Miguel Pereira replaced Geir Inge Olsen on bass before the band started working on the followup.

Listening to "Wintersleep" it’s hard to believe this is the same "Död" who used to fuel the global ChrisISIS while in Satyricon or continues to in Blood Red Throne. In Big City Daniel shows his light side to compliment the darkness of his other work and what a magnifiscent light it is! Having focused most of the compositions on the so called half-ballads, he created some of the best in both hard rock and metal to rival Bon Jovi, The Scorpions or Def Leppard. Take "Love Break The Heart", actually a full ballad, lyrically and instrumentally gorgeous and deeply touching tale of a man’s love lost who can’t seem to get himself together, Daniel’s guitar finishing him off like Charles Michael Schuldiner’s in Death’s "Voice Of The Soul". Or consider similarly themed and powerfully sung Van Halen/Queensrÿche-ian beat of "Iseline" recalling the latter’s "Another Rainy Night Without You" or the Iron Maiden-ic slightly progressive title track. It all makes you want to scream through the tears burning your cheeks like acid rain "Forget love! It only hurts in the end! (double entendre intended)". And not all ballads are equal, as the Manowar/Ozzy Osbourne-ian spiritual anthem "Fire And Stone" makes clear, structurally recalling Pantera’s "Cemetery Gates".

As excellent as Olaisen-penned ballads are, the man equally loves laying down those wah-wah big riffs, exhibit A, the one opening and supporting "Too Late". Man does that riff rock! The song reminds me also of Stonelake and "Marching On Timeless Tales" or Find Me on "Wings Of Love". Daniel Olaisen while being very versatile, as any guitarist, has a particular signature style, which is somewhere between aforementioned Chuck Schuldiner, Darrell Lance "Dimebag" Abbott (Pantera) and Megadeth’s David Scott Mustaine, while Frank Ørland seems to go for more melodeath riffing as evidenced especially on choruses in the aforementioned "Too Late", "Innocence Of A Kill", "The Last Sleep" or the closer "Will You Be Gone" while waxing progressive Evergrey-style on "Harbor Of Tears", while a careful listener might detect dommy stylings toward the end of the aforementioned closer, as if to end the protagonist’s suffering, should this be a conceptual album. All of these combined with the general tendency to rock AOR style make for a unique sound where the aforementioned line between rock and metal completely disappears. Meanwhile, both guitarists rain down every song with solos, melodies, transitions galore you will discover and subsequently treasure with every subsequent spin of this exceptional piece of art.

No matter how many accolades, though, ought to be rightfully heaped on Daniel Olaisen and Frank Ørland, this arena oriented rock/heavy metal cannot sound right without proper vocals and Jan Le Brandt is simply immaculate recalling John Michael "Ozzy" Osbourne while echoying Zucchero & Paul Young’s "Senza Una Donna" (Without A Woman) in "Fire And Stone" , in "Too Late" John R. Bush’s Anthrax-ian vocalizations from "Stomp 442", while in the opener "Midnight Train" he channels Ian Robert Astbury from "Fire Woman" (The Cult) and Paul Bruce Dickinson in the title track, plus the way he sings "aaall alone" in "Iseline" sends chills down my spine every time I hear it – and these are only choice examples of his vocal prowess. Simply put – he was born to do this, hey, they all were!

One gripe about the album seems to be most debut’s standard flaw – some of the songs, while containing excellent and very memorable pieces, seem better as sum of parts than whole pieces, primary example being the Arch Enemy meets Iron Maiden of the anti-war anthem "Innocence Of A Kill", the momentum built up by climactic verses ill-fitting stylistically different chorus. The last 2 tracks, "Harbor Of Tears" and "Will You Be Gone" have, too, great parts, big memorable proggy melodeath choruses , but they don’t convince me quite as songs, unlike the aforementioned standouts. These are all most likely due to personal harmony standards and others may render these as non-issues.

Daniel Olaisen really dropped my jaw on the floor with this project, finally given a chance to showcase all he can be and is, although I’m sure he is nowhere near done within or without Big City who, notabene, never played live but immediately began working on the follow up, "Big City Life". Was it an improvement over the excellent debut? You’ll find out shortly.