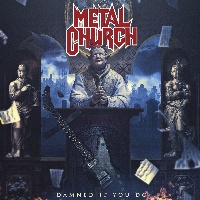 METAL CHURCH – Damned If You Do

The San Francisco Bay Area heavy/power/thrash metal outfit was formed in 1980 (that’s before Metallica!) but changed their name to Shrapnel just a year after, only to become Metal Church again in 1983, release five albums and disband two years after "Hanging In The Balance" (1993). Reunited in 1998, they released four albums and called it quits again a year after "This Present Wasteland" (2008), but finally reunited in 2012, released "Generation Nothing" (2013) and "XI" (2016) and have not broken up even once since (jinx buy me a coke), today with a following lineup: Mike Howe (vocals), Kurdt Vanderhoof (guitars), Rick van Zandt (guitars), Stet Howland (drums), Steve Unger (bass). I have zero intimate familiarity with their back catalogue, as this is one of those, universally regarded as must know, bands that have nevertheless gotten away, or past me. I mean, they are called METAL CHURCH, for cry many sakes, so this must be a gross oversight on my part, right? Surely their 12th release, this here "Damned If You Do" blows away everything their peers are creating nowadays?

To be sure, the album does have some very good tracks, such as the Prong-ish "The Black Things" which recalls Megadeth’s "Public Enemy No. 1", vocalist Mike Howe even waxing Dave Mustaine-y quite a bit, with Vanderhoof and van Zandt laying down some fine melodies and solos and Unger’s boomy bass lines recalling Dave Ellefson’s on Megadeth’s "Peace Sells But Who’s Buying", plus, it must be emphasized, Metal Church sounds a lot like Overkill, so, too, Howe like Bobby Blitz. "Revolution Underway", favorite track, has that Megadeth "A Secret Place"/Queensryche classic Deceased "The Doll With A Hideous Spirit/Chambers Of The Waiting Blind" great melody to it and progressive Marillion-ic transition, while "Guillotine" marries old Metallica (Disposable Heroes) riffs with their "Load" patterns in transition for a more thrashy affair. The Judas Priest-ly "Out Of Balance" flirting with Megadeth’s "Skin Of My Teeth" is also a great track, with most of the remaining songs simpler, thrashier, howbeit less interesting. For instance, both Testament/Anthrax-styled "By The Numbers" and Mötley Crüe-ish "Monkey Finger" take the idea from Megadeth’s "Blood Of Heroes" in using the same riff for both verses and chorus with a different bridge sandwitched in-between, or Anthrax-ian "Rot Away" skips the chorus altogether while "Into The Fold" marries Metallica’s "Better Than You" riff with country for an odd effect.

Does the album contain fillers? I spotted two, both very Exodus-ic: the decidedly uninteresting opening title track and the closing "War Electric", again, with no chorus, that essentially sounds like lesser "Guillotine". Another major flaw is the production, which (note: I got a CD promo) is too bassy and boomy, lets me enjoy the excellent Stet Howland’s drumwork only sometimes for having been buried in the mix and, speaking of the mix, every part seems to ride on a different train with not necessarily same destination. In short, "Damned If You Do" is painful to listen to, as you wonder whether you have gone deaf or your earbuds are slowly fading away.

Despite excellent performances of all members, the new Metal Church album is hardly a revelation, mostly because of horrible production, but, too, because of uneven songwriting. None of the songs get 6/6 anyway and the album, per se, is worth a solid 4.5/6 but I knock off half a point for the production. You can salivate at this album if you’re a fan but I’d rather wait for the new Megadeth.