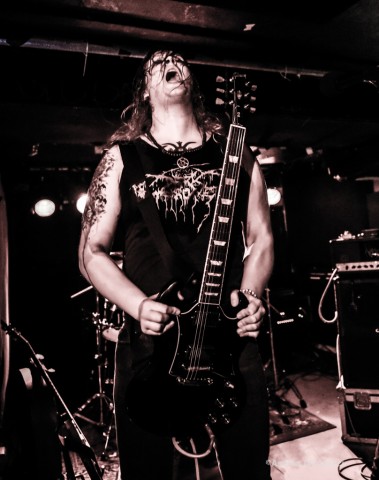 OBLITERATION live at Revolver, Oslo
Photo by Andrea Chirulescu
As I somehow managed to miss each occasion when Obliteration has performed in Oslo for the past years now, November 23rd had to be the evening when I finally break that habit (and, as a side note, the evening when I finish a part in a book  where Obliteration, a homicidal lunatic character, plays an important role). It is also the date when their latest effort, "Cenotaph Obscure", has been release, so double win for the fact that I get to witness the new songs performed in the crowded basement of Revolver, in Oslo. Not sure if such an unholy release had anything to do with the fact that temperatures decided to go below -6 that day, but for once the warmth in the packed Revolver felt welcome.

The evening’s starting act was Stabwound empire, a one man army power electronics act who put together a big table of sound/noise making devices and then spent 30 minutes tweaking them to deliver a rather eerie soundscape, captivating for some and confusing to others. The second act of the evening were a band called Sovereign who apparently have just made their live debut this evening and if they keep up like this, we might hear more often about them and their death/thrash tunes. I liked the fact that they showed quite a lot of confidence for a first time gig and slowly but surely got a lot of the audience headbanging and cheering for them. But they played a rather short set, since by the time I decided to go to the merch stand and buy a CD, they were performing their last song. Nevertheless, another opening act worth checking out again.

A quick change over, big candles placed on the sides, and the 4 Obliteration guys take over the stage, stage that all of a sudden looked way smaller. Hell, the whole place felt kinda small compared to the amount of madness being delivered on stage by these massive Norwegians, their raw and gruesome sounds and simple but full of rage stage show. It’s always impressive to see what people can do with the guitars and the bunch of pedals used on stage, but this evening was even more impressive to see how honest the sound can be when one only bothers with a single pedal. And I’m very glad the sound made the band justice, at least in front of the stage, so I could stand there and feel the awe of witnessing people performing so tight, balanced, fast and in sync. And singing while playing, on top of that. My ear is not trained enough to spot not-very-obvious mistakes in such music, but should they have made any and managed to recover within 1 fraction of a second until the next note, hats off. On top of that, these guys don’t bother placing too many respiro moments in their songs, so the whole experience is such a fast paced assault which surely is, paradoxically, both draining and invigorating at the same time.

OBLITERATION live at Revolver, Oslo
Photo by Andrea Chirulescu
The majority of the setlist was based on the new release, "Cenotaph Obscure", an album that felt very promising ever since the release of the singles earlier in the autumn. I liked their nasty vibe and lack of anything sacred, leading to songs able to guide you – with such mastery – to really dark and obscure corners of your (or someone else’s) mind. And it has that feeling of primitivism, given by the good choice in production with the songs structure. Or lack of an obvious structure, as it feels like sometimes. And that primitivism came out during the live show. A show without an encore! Hell yes, how I missed one.

Obliteration is heading on a tour with Aura Noir throughout Europe in December, so if you want a perfect old school vibe evening, you’d better attend one of the shows and experience some of this fascinating ugliness that’s so welcome nowadays.. Or at least give the release a chance to consume you. Will be well worth the misery.