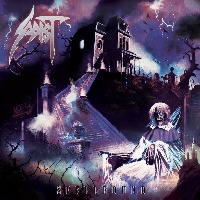 The Italian progressive death metallers had to wait three years post formation to present their remarkable debut "Above The Light" (1993) to the world, a wonderous amalgamate of Death and Slayer with additional heavy keyboards of Pestilence’s "Testimony Of The Ancients". True, the long compositions, and especially keyboards passages tended to be a little self indulgent but the talent, skills and vision of the artist was undeniable, guitarist’s Tommy Talamanca’s ability easily compared to Death’s Chuck Schuldiner’s. "Tribe" (1995) and especially the fantastic "Crust" (1997) solidified Sadist’s position as stalwarts of progressive death metal, which they almost destroyed with the nu metal/non-metal joke called "Lego" subsequently disbanding in 2001. Reformed in 2005, Sadist reaffirmed their relevance with "Sadist" (2007) and "Seasons In Silence" (2007), but it was "Hyaena" that hearkened back to both the debut and "Crust" with stellar songwriting and ideas that made it, arguably, Sadist’s best work to date. That date could or not be 2018 depending on how good is their latest, this here, "Spellbound".

On the surface "Spellbound" appears to maintain the excellency of "Above The Light", "Crust", "Seasons In Silence" or "Hyaena" with classic material of abrasive near-industrial Slayer-ic verse riffs and melodic heavily keys-driven choruses bordering on melodeath, taking pages from latter Death or Anata, as in Mike Olfield "Tubular Bells"-like "The Birds", very technical "Bloody Bates", Middle Eastern/Addams Family keys-driven "Stage Fright", In Flames-ian and almost djenty latter Death chorus-driven "Frenzy" and the gorgeous progressive favorite "The Mountain Eagle". Tommy Talamanca lays down amazing jazzy riffs, guitar/keyboards melodies and solos, Trevor Nadir’s and Andy Marchini’s growls are as caustic and cold as ever with Marchini’s bass lines the best thing since Steve DiGiorgio, while Alessio Spallarossa pounds away at various paces and structures like he’s Dave Lombardo. The songwriting, though, is another matter.

Sadly "Spellbound" is overwhelmingly filled with disjointed songs that sound like demo versions of their future greater selves. Take the Fear Factory-ic title track or Into Eternity-ian "Rear Window" or progressive Mastodon-ian/Meshuggah-ic "I’m The Man Who Knew Too Much" that are full of great riffs and occasional melodies but entirely devoid of those fantastic choruses, whereby most of the melody is keys-driven and most tracks are completely taken over by bassy noodling that is as impressive as momentum killing. At times, this gives an impression as though, to butcher that last title, Tommy Talamanca were a man who didn’t try too hard. Indeed, except for the flawless "The Birds" and "Mountain Eagle" Sadist does not seem to move much beyond their comfort zone. In other words, this is hardly "Symbolic" after "Individual Thought Patterns".

While on "Hyaena" Sadist blew me away with their renewed creativity and songcraft, I find this, their new album, a bit disappointing. I realize that a sprawling ambitious lyrical concept based on Alfred Hitchcock’s thrillers demands variety but it does not seem to translate into consistent quality. We would not, to borrow again the Death example, want "Leprosy" after "Symbolic", would we? Here’s to hoping, then, that Tommy & Co. will rebound, regroup and smash us all to bits with the followup in four to five years making me eat my words, as, I am positive, they are more than capable of doing.

MORTIIS – The Song of a Long Forgotten Ghost (2018 Remaster)