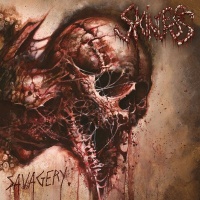 Formed in 1992 out of the ashes of Gorebag, split up in 2011 and reformed in 2013, according to bands’s own bandcamp description, Skinless "pile-drives the standard death metal formula and rallies fans with the forward-charge of wreckage-provoking vocals of Sherwood Webber, demolishing beats of Bob Beaulac, and ravaging riffs of Noah Carpenter and Dave Matthews (no relation to the famous popstar with the same name)
alternating "between high-speed salvos and pile-driving grooves that embody and amplify the hardest-hitting hallmarks of U.S. metal" while "powerful vocals punch through churning guitar crunch to an untouchable new apex" supported, it must be added, by Joe Keyser’s boomy, distinct and ever-present bass. Indeed, my first encounter with them, the hyperbrutal "Trample The Weak, Hurdle The Dead" (2006) easily conformed to the above description, Skinless outbrutalizing even Misery Index, with which they shared compositional similarities. The 2013 comeback "Only The Ruthless Remain" seemingly effortlessly channeled the same energy and power while significantly improving songwriting and musicianship, using classic blueprint for riffs such as Black Sabbath’s "Iron Man" on the groovy Panteric title track. Does "Savagery", five years later, tap into that same dark side of the Force?

The short answer is: like you wouldn’t believe! So the album starts off the title track with a Sepultura "Chaos A.D." riffing bordering on nu metal, but when you consider that nu metal is basically death metal riffs with whiney vocals, that’s understandable if slightly odd for Skinless, and "The Siege Engine", which contains favorite riff, continues the "Chaos A.D." vibe, or, more specifically, its first 4 tracks. However, this is where Skinless gets faster and more brutal "Trample The Weak…"/Immolation style, ending with a My Dying Bride "From Darkest Skies" bass with a touch of latter Death guitarwork. "Skull Session" strongly reminds me of Deceased "Fearless Undead Machines", an impression remaining for the duration of the instrumental "Reversal Of Fortune". Skinless gets very Nile-stic with My Dying Bride leads and classic Death/Sepultura riffs on the superb "Exacting Revenge" (the sound of which interestingly recalls Diecast song with a very similar title) as well as on the "Medieval" and "Line Of Descent" while approaching thrash metal, "Cruel Blade Of The Guillotine" with a very strong Slayer/Machine Head vibe, especially in the beginning. The nearly two minute instrumental variation on Death’s "Baptized In Blood" from "Scream Bloody Gore" album (although a nod less obvious than "Trample…" to Death’s "Together As One" from "Human" on "Overlord"), "The Hordes" ends the proceedings, but there’s still a descent cover of Crowbar’s "High Rate Extinction" from the eponymous album. Are we satisfied, scared, Skinless? You had better believe!

With "Savagery" Skinless by no means softens its devastating blows but rather adds twists, turns, hooks, melody while significantly improving the overall musicianship for a tremendously satisfying release, Tom Case’s and Dave Otero’s production an excellent balance between mud and clarity for an overall devastating impact. There is more groove and simple slower riffs in "Skull Session" and "Cruel Blade Of The Guillotine", more so than in the past which does make it seem as though "Savagery" is less extreme than "Only The Ruthless…" or "Trample…" but they are finetuned and balanced against plenty of their standard death/thrash/grind onslought. Skinless are evolving but this evolution is definitely according to an intelligent design.