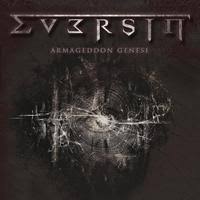 "Armageddon Genesi" (Origin Of Armageddon) is the fourth album from the Italian groove thrashers Eversin. While the band has always used the Bible as the source of their lyrical concepts, this album is based specifically on The Book Of Revelation almost verbatim, specifically chapters 13,16, 18 and 20 in reference to The Battle Of Armageddon and The Sheep And Goat/White Throne Judgment. Having built their songs on nu metal of Soulfly and Korn (bass!) as well as groove metal of Lamb Of God or Krepuskul, with some Kreator thrash and death influences of Obituary, Hypocrisy and Gorefest, Eversin aims to scare the living daylights out of the brain-dead heart-closed and desensitized humanity. Do they succeed?

While "Armageddon" is not extremely minimalist, most of the songs revolve around one, two power chord structures patented by the likes of Korn or Sepultura on "Roots", the types of riffs a basic guitar player can churn out in his sleep. Ingnazio Nicastro’s bass, while superbly recorded and performed, gives me Life Is Peachy/Follow The Leader (Korn) flashbacks as I half-way expect vocalist Angelo Ferrante to yell "all day I think abooout seeex" but then I remember the man’s English is second language and I am more conscious of similarity to Max Cavalera in the way vowels are pronounced as vowels instead of consonants in words like "this", but having spent half of my life with English as a second language I know the struggle first hand. Ferrante’s vocal has also some Tom Araya (Slayer) and Mille Petrozza (Kreator) in it so Cavalera comparisons probably are mostly accent based, and, overall, Angelo does do a good job of conveying the lyrics to match the bleak soundscape. Danilo Ficicchia is an adequate drummer but I hear him sweating only on the closing "To The Gates Of The Abyss", while Giangabriele Lo Pilato lays down some interesting death riffs particularly on the title track and impressive solos in almost every track with the exception of "Soulgrinder" where the late Ralph Santolla (Obituary, Deicide) makes it complete.

The aforementioned "Soulgrinder" is a groovy catchy melodic cut that reminds me why I enjoyed Sepultura’s "Chaos A.D", "Seven Heads" references the Two Beasts, The Dragon and The Fall Of Babylon from The Book Of Revelation 13 and 18 as well as Kreator’s "Cause For Conflict", Lamb Of God and Prong/Anthrax in the melodic aspect and the title track swaps Slayer-escue and Obituary riffs with early Hypocrisy and Gorefest showcasing Ferrante’s impressive death/black growls/rasps narrating the battle between Satan’s horde and Jesus Christ and his Army at the hills of Harmageddon (from which we get Armageddon). As he will, Eversin, Condemns religious mercenaries of hatred and fear (The Ministry "NWO" – sounding "Legions"), war, sin and death destroying humanity and the Earth, "Jornada Del Muerto’s" (Day Of The Dead) and the general daily reality where the innocent and heroes get punished while the murderers, rapists and child torturers get a judicial smack on the wrist and are released to rape, torture and murder again so that lawyers on both sides can make lots of money, but the album ends on the positive while horrifying note where we all get what we deserve, God separating Abels from Cains with "politicians first to fall", so that we know the Judgment is just.

While "Armageddon Genesi" does get better with greater exposure, out of nine songs I have identified three interesting cuts in the otherwise fairly even constitution. At least three tracks (Jornada Del Muerto, Where Angels Die, To The Gates Of The Abyss) not only have the aforementioned minimalistic uninteresting riffs but nothing otherwise for majority of a song which makes absorbing the heavily Biblical lyricism that much harder by someone not into the subject as heavily as Eversin and I.

"Armageddon Genesi" gets high accolades for the captivating lyrical concept, less so for the music. I would recommend fully developing songs on the next album with more twists and turns and, by God, let’s leave the nu metal genre behind.