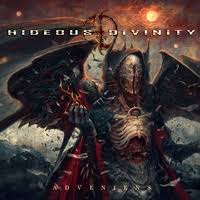 Death metal is a subgenre that constantly changes. Some would have it not move beyond the classic dirty, rotten sound of Obituary or early Death while others can appreciate the more technical progressive aspect of Obscura or Decrepit Birth. One of the bands which found the happy medium is Ulcerate which in turn inspired others who marry the old and new with power of modern production such as the Italian Hideous Divinity. Hideous Divinity has produced three albums so far and the third one may just be their most accomplished work to date.

The concept, begun on the 2012 debut "Obeisance Rising" based on John Carpenter’s classic iconic movie "They Live", continues on "Adveniens" with one twist: the freighting evil robot-like alien entities are no longer hiding behind human faces, they’re out, in the open, hideous divinities demanding of their earthling weakling subjects that they "call me never, call me now" (Ages Die), the beginning of the new flesh, as the cold female announcer asserts in the opening seconds. Subservient humanity’s about to be merged with the machine, clearly a nod to Fear Factory, whereby "soon all of us will have special needs", "Adveniens" the soundtrack to the Apocalypse the likes of which one could never foresee in the Bible or could it be we were sloppy readers with lazy imagination?

The most immediately pulverizing aspect of the soundscape is Giulio Galati’s work behind the kit, his performance benefitting immensely from the superb production. Not merely an instrument but rather the very pen with which this story is written, now an insane pounding of the new flesh into submission to its new masters, now a steady, militaristic machine-like staccato of the living death recalling such icons as Florent Mounier (Cryptopsy) or Zbigniew Robert "Inferno" Promiński for variety, syncopation, timing, power, speed, brutality and precision, definitely one of the best drummers in metal.

Galati truly leads the ink and paper of the brutal yet incredibly catchy vocal attack of Enrico H Di Lorenzo and the insane, varied, brutal acrobatics of Enrico Schettino’s and Giovanni Tomassucci’s guitars. Similarly to Ulcerate, Hideous Divinity mastered the art of extremes: a sophisticated attack on all cylinders to the point of unbearable Mark Kloeppel/John "Sparky" Voyles (Misery Index) style (When Flesh Unfolds) cut off by a sudden calm and background Michael Hoggard-ian (Ulcerate) melody (Passages) only to re-brutalize with new vigor and power never losing an ounce of hook or a chugging rhythm, always maintaining interest of the listener. Indeed, "Adveniens" as far as brutal death is concerned, is easy love for wild memorability rivaling and reminiscent of Immolation’s "Kingdom Of Conspiracy". There are obvious comparisons to the way Adam "Nergal" Darski (Behemoth) or Karl Sanders (Nile) built ominous ancient gods worship anthems, particularly on the fantastic chant "Sub Specie Aeternitatis", where Jason Netherton (Misery Index), Niels Adams (Prostitute Disfigurement), Paul Kelland (Ulcerate), Dallas Toller – Wade (Nile) and Mike Hrubovcak (Monstrosity) fuse into masterful Di Lorenzo growling "I! see! nothing more!" on top of very melodic pulsating Robert Vigna (Immolation), Hoggard (Ulcerate) or Fabio "Prometherion" Palazzola/Daniele "Nero" Amador (Ade) harmonies and Dino Cezares (Fear Factory) militaristic precise rhythm conjured by Schettino/Tomassucci guitars for my favorite track on the album, though by no means the best, the overall songwriting better than anything Behemoth or Nile produced since at least Hideous Divinity’s inception.

The Italians just completely outdone and outspent themselves on this record leaving no stone unturned expect for one: Stefano Franceschini bass could have been louder in the mix, but this in no way prevents “Adveniens” from being some of the best brutal technical death metal music has to offer its enthusiasts. My first perfect score in a while is oh so well deserved. On with the new flesh!

DARYL EASLEA – Without Frontiers: The Life and Music of Peter Gabriel