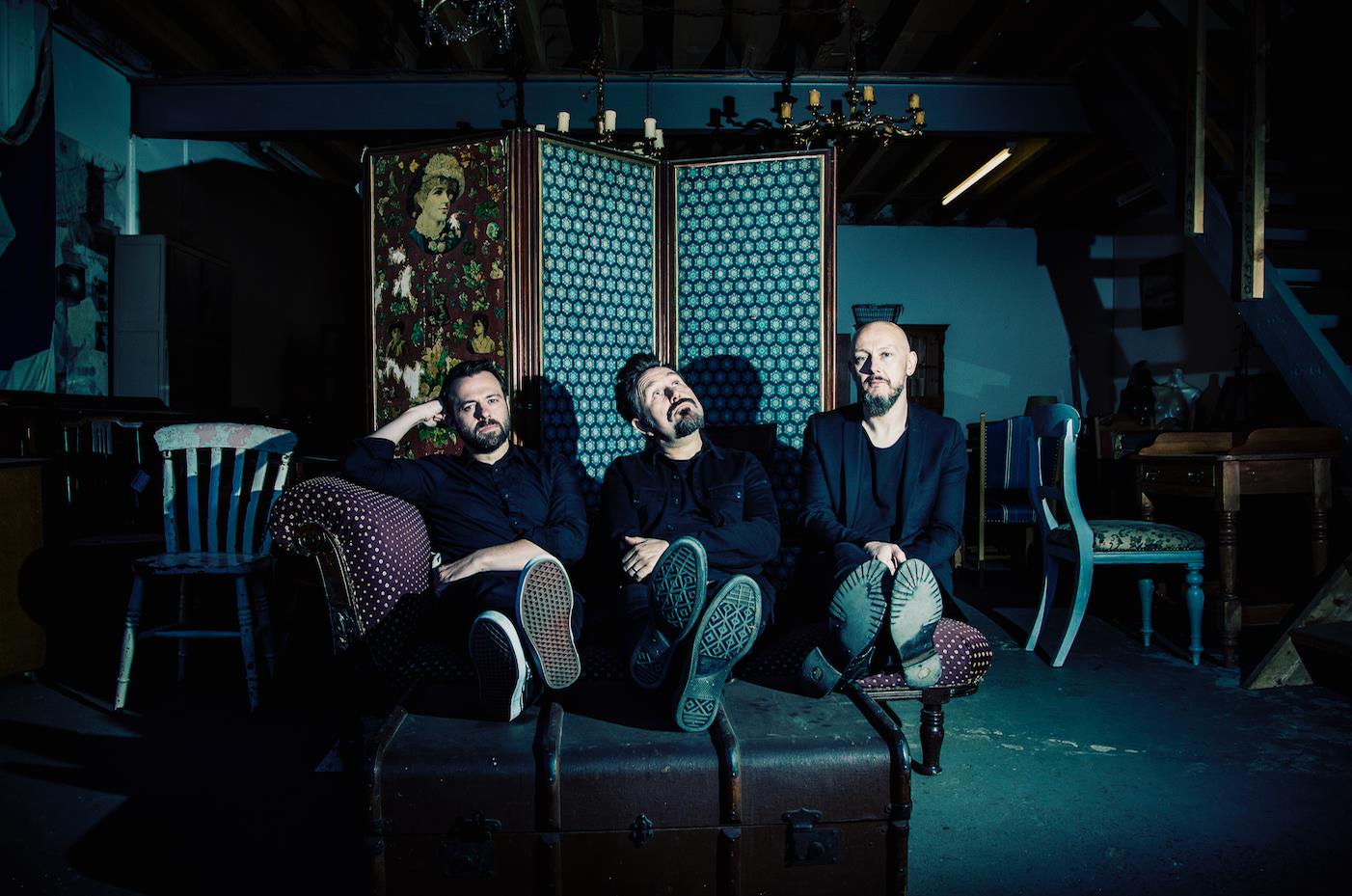 Andy Cairns tells a great story about Therapy?’s spring UK tour with The Stranglers. As the trio walked onstage in Kilmarnock, Scotland, their frontman noticed a solitary punter, three rows from the front, vigorously booing his band before a single amplified guitar chord had been struck. Each successive song in the set received the same vociferous, relentlessly hostile response. Two nights later, at Nottingham Rock City, the antagonist was back once more, front and centre, still booing, though with markedly less enmity than before. In Manchester, on the final night of the campaign, Cairns stepped from his tour bus to be confronted again by the by-now-familiar face of his new nemesis. This time, however, the guy was clutching a pen and a copy of Therapy?’s classic 1994 album Troublegum. “Could you sign this for me please?” he asked politely.

“I think we’d battered him into submission” Cairns says with a laugh.

It’s an instructive anecdote, both a testament to Therapy?’s enduring capacity to win over hearts and minds with their singular, sui generis sound, and a reminder, in a broader sense, that even in the face of alienation, disaffection and discord, there remains hope for consensus, harmony and solidarity.

Which brings us, neatly, to Therapy?’s fifteenth studio album ‘CLEAVE.’ Roughly themed around notions of duality and division, the band’s follow-up to 2015’s acclaimed Disquiet – and their first recording for new label Marshall Records – is a sharply focused, fiercely intelligent, impassioned and empowering set of songs from a band operating at a creative and artistic peak. A scathing, incisive state-of-the-nation address, investigating the schisms in contemporary society and the motivations of those seeking to propagate disjuncture, it’s a powerful, challenging, uncompromising collection from a band never afraid to confront and dissect humanity’s darkest impulses.

From the thrillingly propulsive assault of Wreck It Like Beckett via the addictive ‘Callow’ (the album’s first single, out now) and the unsettling I Stand Alone to the disquieting, bleakly beautiful No Sunshine, the ten tracks which make up ‘CLEAVE’ coalesce to paint a portrait of a fractured, dislocated world rent by unprincipled, mendacious masters.

Andy Cairns is justifiably proud of the unified drive and restless creativity evident in this powerful, questing collection and says this about the forthcoming opus
“I know that we can be a difficult sell, because we have no particular niche and no desire to conform” he admits, “but Therapy? have always been the kind of band that when people discover us, they immerse themselves deep and keep us close to their hearts. We’ve never been part of a trend, so we’ve never been cast aside when fashions changed. CLEAVE, to me, is Therapy? at our most focused. I love our more experimental side, but I also love that this record sounds like it was made by a band who’re all reading from the same script and moving forward with the same determination and hunger.”

“We’re living in a time riven by conflict” Andy Cairns states baldly. “You look at what’s happening in the United States at present, what’s going on with Brexit in the UK, with North and South Korea, with Palestine and Israel, and it’s impossible not to see turmoil and turbulence. Some of these conflicts have been going on as long as I can remember, but they seemed to really reach a head again around the time we were writing the album. CLEAVE is our response to the divisions we see all around us.”

It’s worth considering Therapy?’s journey to this point. Their story begins in Northern Ireland in 1989, when vocalist/guitarist Cairns, bassist Michael McKeegan and drummer Fyfe Ewing – bonded by a deep appreciation of post-punk, art-rock, Detroit techno and the most uncompromising sounds from the fringes of the US noise rock underground – embarked upon a mission to investigate the psyches of the marginalised, malcontent and misanthropic. The 1990 release of a self-financed seven inch single (Meat Abstract) on the band’s own Multifuckingnational Records label, was followed by the recording of a brace of bold, abrasive mini albums, 1991’s Babyteeth and 1992’s Pleasure Death, for London-based Wiiija record, both collections securing Number 1 slots on the UK’s Independent music charts. Such success did not go unnoticed by the nation’s major labels, and the in-demand trio elected to partner next with A&M Records, for whom they promptly delivered a Top 30 single (Teethgrinder) and Top 40 album (Nurse) in 1993.

On a creative roll, in 1994 Therapy? truly hit their stride with the electrifying, exhilarating punk-metal crossover set Troublegum, which served up no fewer than five UK Top 40 singles (Turn, Nowhere, Die Laughing, Trigger Inside and Screamager, the opening track from 1993 EP Shortsharpshock), sold one million copies worldwide and garnered the fast-rising band a Mercury Music Prize nomination. Unwilling to dilute their vision in pursuit of mainstream acceptance, the band spent much of the two decades which followed re-writing the rule book for what constitutes success for a modern rock act, issuing a succession of fiercely idiosyncratic albums, aided and abetted by the recruitment, in 2002, of drummer Neil Cooper. To the delight of their loyal fan-base, in 2015 the trio conceived a sequel of sorts to Troublegum in Disquiet, a brilliantly-realised, bruisingly melodic punk/metal collection which took as its starting point questions of where the adolescent protagonist of their 1994 masterpiece might find himself 20 years on. Stepping away from that fascinating narrative, CLEAVE continues along a similar sonic path, alluding to the band’s ‘classic’ sound while opening up new paths to explore.