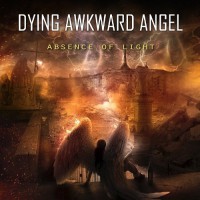 Italian melodeathsters Dying Awkward Angel (henceforth DAA) having released one album so far, are back with Abscence Of Light, which guitarist Edoardo Demuro described as "heavy, fast, powerful, dark and bright at the same time". Taking clues from Detonation, Dark Tranquillity, In Flames, Hypocrisy and Morbid Angel DAA is a mix of classic, familiar and modern sounds.

The band, consisting of Michele Spallieri (vocals), Lorenzo Asselli (guitars), Edoardo Demuro (guitars), Davide Onida (bass) and Luca ‘T-1000’ Pellegrino (drums) holds through to both melodic and the death metal parts of the classification, building their songs around a Detonation-meets-Morbid Angel rhythm with early Dark Tranquillity melodies wrapped up with good solo on the opener "Blood Of Your Blood" with a Sadist break and continues in that vein with old All That Remains riffing. There is no access to the lyrics but "Isaiah 53:7" is an obvious Bible reference to the description of Christ who "like a lamb silent before its shearers opened not his mouth" and it seems like this is extended to a personal experience of the narrator as well but it is a very little educated guess, the song built around strong Slayeric riffs with Children Of Bodom’s "Hatebreeder". The short Morbid Angelesque "Shade" leads to Immolatory "Dolls" of which ending pays tribute to Machine Head’s debut which is a perfect way to usher in the Hypocritical "Sancta Sanctorum" to the point of the impression as though I was listening to Peter Tägtgren’s full time project, and the short In Flamesian instrumental title track brings us already half way. "Maldita Seas" brings back Detonation riffs with All That Remains hardcorish feel and interestingly whispered verses, while the normally dead and silent bass of Davide resounds with a cool line in "The Dust Devil" and we’re back with Hypocrisy now marrying "Gothic" Paradise Lost for "Tusk". The album closes with the, best on the album, multimelodic My Dying Bridian "Killing Floor" whose ending melody should have stuck around longer.

"Absence Of Light" is a great album for fans of not just melodeath but old school death metal if you don’t mind occasional ventures into familiar hardcore territories, but it could have used a better production as Daniele Veronese almost might not even have bothered to show up for the recording session while the mastering does not do the appropriately nicknamed drummer, Luca ‘T-1000’ Pellegrino, enough justice.

BAN BIANCA – Put Your Money Where Your Mouth Is