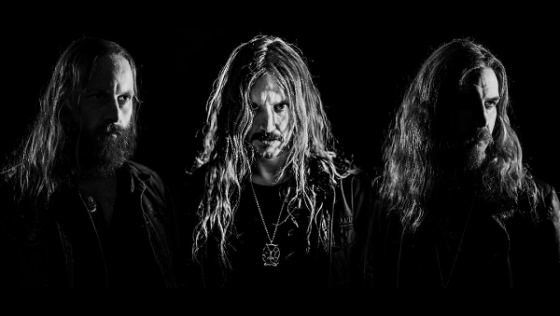 «In Chaos Becrowned» embraces the constructive influence of chaos within the cosmic order. The track is also a portrayal of the absence of irrelevant and distasteful deities, coupled with the deeply personal process of releasing the forces often hidden beneath obsolete symbolism and ideas. In an occult sense, the song has a very positive outlook. As the title track for our upcoming album it also epitomizes the main themes on the record, dealing with personal esoterism, mythical liberation and profound opposition. Musically the song is a progressive and percussion-driven rhythmic hymn, focused on repetition, building slowly towards the more all out blackened heavy metal climax.

Formed in Oslo in the fall of 2016, and founded on the pillars of the 80s and 90s avant-­garde rockers The Void, Acârash is an occult hard rock band that embraces tradition, yet manages to forge a sound all of its own, with its blend of hard rock, doom and black metal. It is a sound in which esoteric poetry and ritualistic contemplation are central to the music, and mirror the nuances in both sound and musical contrasts.

With their debut album "In Chaos Becrowned", Acârash’s lineup of of Sølve Sæther on drums, Lukas Paulsen on guitars and Anlov P. Mathiesen on bass and vocals, manage to reinvent, whilst at the same time preserve, in order to deliver a record that explores and develops the boundaries of rock and metal, and naturally alternates between raw catchiness, dark introspection, and progressive playfulness.

Mixed and mastered by Ruben Willem at the Caliban Studios in Oslo, and with artwork by Lasse Almqvist Scherven, tracklisting for "In Chaos Becrowned", which will be released in Digi CD and LP formats, is as follows:
1. Cadaver Dei
2. Shadows Roam
3. Gathering of Crows
4. In Chaos Becrowned
5. Ashes of the Mortal Mind
6. Legio Obscura
7. Sacrifice the Winter Wolf
8. Cenotaph in Flesh