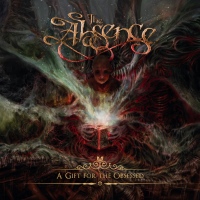 THE ABSENCE – A Gift for the Obsessed

It is good to be a metalhead and I pity the fool who can’t stand metal because this is what it’s all about, this is the stuff your Ride the Lighting/Master of Puppets/Rust in Piece/Arise was made of, and above all, Death from their last three albums. To be sure, there’s plenty of old In Flames, At The Gates, old Arch Enemy and old Soilwork references (vocalist Bjorn Strid a guest on this album), and, from not so old references. early God Forbid, old Trivium (in the technical aspect of "Ascendancy" only), early Unearth, Darkest Hour and Revocation, and, of course, the mighty Testament, all tastefully incorporated into The Absence 2018. The Absence may be wearing their influence(s) on their sleeves but it’s more like a tattoo or a badge of honor. "On your worst day metal will save you every time" hails one Facebook meme and rightly so for this is the stuff capable of saving lives, folks, excellent, excellent stuff.

There’s no way to be sure but I have a feeling the title is a little tongue-in-cheek slap in the face of those who, like yours truly, complained about the last album because they expected the quality of their first two full lengths: the infectious "Riders of the Plague" (which descended on me like a hawk on an unsuspecting prey and became one of 2007’s most celebrated works), and their more straight up melodeath debut "From Your Grave". On the At The Gates/Burning Bridges-Arch Enemy rhythms and powerful epic riffs of latter Death, driven by Swedish melodeath of Amon Amarth rode a thrashy Testament beast with vocals of Tomas Lindberg-meets-Chuck Schuldiner – like Death – an American band from Tampa, Florida, equal parts death and thrash in the centre for brutal death metal. That’s why I was so disappointed with "Enemy Unbound". The riffs were there, the melodies also to an extent, but the aggression, the epic powerful progression was gone and the album felt flat, overproduced and rightly widely criticized yet, although some were pronouncing premature death of The Absence, I, however, did not lose hope in these guys until they…disappeared for years so I was convinced they’d call it quits.

I was unaware of the 2016’s pilot single "Septic Testament", so, after 8 long years, I was surprised and humbled by "Alpha Illusion" on Deezer, an immediate allusion to "World Divide" off "Riders", likely on purpose, promoting their brand new album, which I hoped would be a return to the 2007 form. Now, that I have heard the whole thing, my overall impression is that this blows everything these guys have done before out of the deep water, delivering everything I love about aggressive melodic metal in spades with the attitude I did not expect from them, and then some. Jamie Stewart’s vocals have greatly improved and became more powerful, varied and decipherable, thankfully without changing from growls to cleans, as that usually comes with some decrease in quality. Everything is louder, faster, more blastbeats, more epic, more melodic, more varied, more creative, more, more, more, with an incredible replay value, with a crystal clear yet not overproduced sound allowing for actual AUDIBLE bass. So to me and the other obsessed ones this new album seems like a perfect gift, as it does everything right and none of the wrong. Some of the tracks could probably use a little more variation but, who’s to say, maybe the idea was slow immersion?

The opening title track starts the album very similarly to Death’s "Symbolic" and immediately, it is loud and clear that this is no "Enemy Unbound", the song a nod to "Dead & Gone" from "Riders of the Plague", which was arguably the best track on that album. And this is the least adventurous track on the album. We segue into "The Forging", a song that could easily be on the Arch Enemy classic "Burning Bridges" or an early Ozzy album, but suddenly a latter Death riff quiets things down to an eerie ballad-like guitar reminiscent of the breaks in Machine Head’s first two LPs, whereby a Michael Ammot-like short solo ushers in a…Tool-ish groove followed by an effective stop and go riff that invites a death/thrash "Symbolic" riffing and I’m beginning to think the start of the album was no accident.

It is, indeed, no accident that the album starts similarly to latter Death’s "Symbolic" because the spirit of Death casts its shadow all over "A Gift". While the first two songs are merely a taste of what’s to come, from "Misery Trophies", all the way through "Idle Thrones" the listener is treated to more of an incredibly skilled, creative, technical yet extremely memorable infectious melodic death/thrash metal sandwich with masterful solos and guitar leads up the wazoo! "Misery Trophies" reminds me of Insomnium or In Mourning in the melodic and progressive aspect and even echoes some Opeth. "Thought & Memory" (not unlike "Murder" off of "Riders", bearing the same Middle Eastern acoustic motif) and the Carcass-ian "Celestial Hysteria" (featuring vicious razor-sharp old school Swedish brutal thrash/death riffing riffs in the verse angrier than a Tea Partier- turned – Occupy Wall Street protester with a flamethrower) are probably the two best tracks on the album but "Septic Testament", "Alpha Illusion" and "Fear of Existence" (echoing Unearth’s "Glorious Nightmare" off <III – In The Eyes of Fire>) are just as carefully, beautifully and powerfully constructed and executed. It’s all peppered with little effects like acoustic/ballad fade outs, whispers and ominous raven croaking, things normally associated with progressive metal. Closing the proceedings is Darkest Hour-flavored, "Idle Thrones", reminiscent also of The Absence’s own "Seven Demons" off the debut (minus the clean vocals) and features some Testament thrash, as well as "Symbolic" progression (this and "Fear of Existence" the most evidently Death-ened tracks on the album) for a varied affair, one of the album’s standouts, and a perfect ending of this outstanding effort.

As was the case with "Riders", the album would not be complete without a cover, so guest Bjorn Strid (Soilwork) helps make the classic Suicidal Tendencies "You Can’t Bring Me Down", an already heavy and aggressive song, even more ferocious, Strid perfectly matching Mike Muir’s own classic performance (to the point that I actually confused him with Muir) bearing the timeless message to the people who need to be offended to wake up and smell the big pile of excrement this world is rapidly becoming, a culmination of the ferocious attitude and sheer bravado with which this album has been created.

With "A Gift for The Obsessed" The Absence take the best elements of their first two albums, whatever did work from the third, and double the aggression, variety, melodicism, speed and the overall appeal to be truly deserving of the moniker "the best Swedish melodic death metal band that ever came from Florida, Tampa", (and hopefully won’t disappear again) showcasing that not only are they highly relevant in today’s metal scene but that melodic death metal can still sound fresh and innovative while retaining that classic sound feel and aggression. Truly a gift for the obsessed.

PISSED REGARDLESS – Feed The Birds