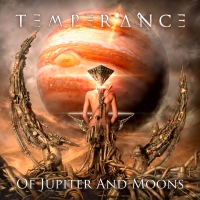 TEMPERANCE – Of Jupiter and Moons

Now, I am not usually the kind who gives a rat’s rear end about bands changing vocalists unless the vocalist happens to BE the band, as is the case with Chiara Tricarico and Temperance. All of the charm and everything that made Temperance uniquely stand out from the pack, along with the very soul of the band, has left the building with Ms. Tricarico. I will go ahead on the record and say that booting her out of the lineup was the dumbest move Temperance could have ever made. Why, you ask? Because "The Earth Embraces Us All" was a metal masterpiece (glowingly reviewed by yours truly) and largely due to the presence and performance of Chiara Tricarico. Now we have this new album and, to compare it to even the pre-Earth material – my how the mighty have fallen! Basically, Temperance just sounds now like poor man’s Helloween (Broken Promise) with female vocals. The new dame’s role has even been curtailed to showcase more of the male vocals (of which one more have been added to the flock) so comparison is even more fitting. Yes, Temperance has always been basically a power metal band but this is ridiculous. Why still so high a score? Because musically and compositionally Temperance is still serviceable, but read on.

Every single song, with notable if horrible exception of "Alive Again" (with admittedly cool mid-chorus), is cut from the same cloth. The songs all seem to be tailored for radio, each with the catchy yet ultimately forgettable chorus. Same pace with scarce variation, haunts them all. The more aggressive elements and heavy riffing has been toned down or replaced by Deep Purple – like keyboards (The Art of Believing) . It is as though Temperance really took their very name to heart. To be sure, when she is allowed to LEAD, Alessia Scolletti sounds great but she just sticks out like a sore thumb, Marco Pastorino being front and center, in this whole sordid mess that is "Of Jupiter And Moons". I sure hope the name of the album is not alluding to SATELLITES of GREAT planets, if you catch my drift, because this is not going to sit very long on my hard drive. Bring back Chiara or descend into obscurity. Oh, wait, you already have. To paraphrase the line from "Daruma’s Eyes (Part 1)", this is not likely to last forever if the Temperance does not change course fast.

EMERALD SUN – Under the Curse of Silence