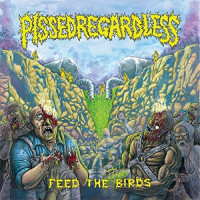 PISSED REGARDLESS – Feed The Birds

San Diego’s crossover/thrash metal hybrid Pissed Regardless, whose entire discography consists of one demo and two EPs, including this short monument (10:10), is another one of those run-off-the-mill ilk whose sole purpose is to just let off some pent up steam in a matter patented by the likes of Suicidal Tendencies or D.R.I. who already wrote all the riffs long time ago.

More fully, Pissed Regardless’ sound is part Slayer part Pantera part Anthrax (Among The Living) part D.R.I., with heavy helpings of Johnny Rotten’s (Sex Pistols) devil-may care punk attitude or someone recording between a cigarette and a beer whilst chilling on a bed, with mandatory severely excessive profanity (literally every other word), while, at other times, with surprisingly poignant messages this side of Biohazard, such as "stand up fight back, take your life back, never too late to get back on the right track" (No Reprieve).

Most riffs laughably simple and generic (particularly title track), some actually recall early Prong with the illusion of sounding simple until you actually stop to think about playing them (Lipstick On A Pig), with the all-encompassing hardcore spirit (Trust No Pulse), even venturing briefly into death metal territory (Empty). The musicians actually do a fine job, overall, particularly the drummer (Empty).

While I am not hiding my animosity for heavily profane lyricism (seriously, what’s the point?), nor do I particularly care for the so called "joke metal" (since metal ain’t no joke), I still try to extract as much good as I can from what’s left, and I do believe I did a fair and balanced job of it in this case, despite personal misgivings.

NO HOT ASHES – No Hot Ashes