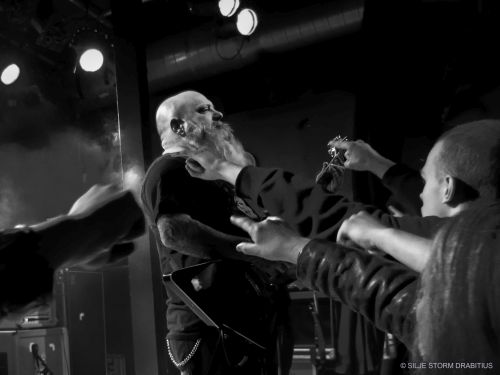 On April 15th, Crowbar performed at Hulen, in bergen and our new colleague Torbjørn attended the event and wrote some words about his experience. Unfortunatelly, we didn’t have a photographer present at the Bergen concert, but instead we had one in Oslo, hence the article uses the images taken in Oslo the evening before.

Sludge metal legends Crowbar have been around for ages and have consistently delivered great albums that will go down in history as cornerstones of the very genre that they helped create. Crowbar are synonymous with quality music and consistency, of that there can be no doubt. Last night the bombastic ensemble from New Orleans laid siege to the charming city that is Bergen and completely pulverized the fucking thing by means of their inhumanly heavy and bone-crushing tunes. Unfortunately, not that many people had found their way to the cool venue named Hulen on that particular night, which was a bit of a shame as the band played their asses off and delivered what is unarguably one of the best metal concert to have taken place in the aforementioned city for quite a while.

I would wager that there were about 150 or 160 people there. Truth be told, my eyes were mostly glued to the stage throughout the performance, so there could have been either more or less people there than that, but the point is that the turnout was slightly disappointing in the sense that a band of Crowbar’s caliber and talent certainly deserve a larger crowd than that. Still, it did not seem to affect the band at all and they simply slayed last night and delivered every note and chord of theirs with an emotional intensity that is both unique and rarely found elsewhere. The sound was superb and spine-chillingly heavy; the whole affair felt overpowering and outright devastating. Crowbar launched into the splendid “Conquering” and then went through magnificent hymns of mourning such as “All I Had (I Gave)”, “The Cemetary Angels”, “Walk With Knowledge Wisely”, “Existence is Punishment”, “Liquid Sky and Cold Black Earth”, and the earth-shattering “Like Broken Glass”. The melancholy masterpiece that is “Odd Fellows Rest” loomed large last night as the band were celebrating its 20th anniversary and so we got to hear “To Carry the Load”, “Planets Collide”, “…And Suffer as One”, and “Scattered Pieces Lay”. Crowbar were simply a majestic force to be reckoned with and there was warmth and humor present in between the songs and a lot of cool interaction between the band and the fans. Everyone involved was having a great time and it was a memorable concert for sure. Great stuff!

BLOODHUNTER – The End Of Faith