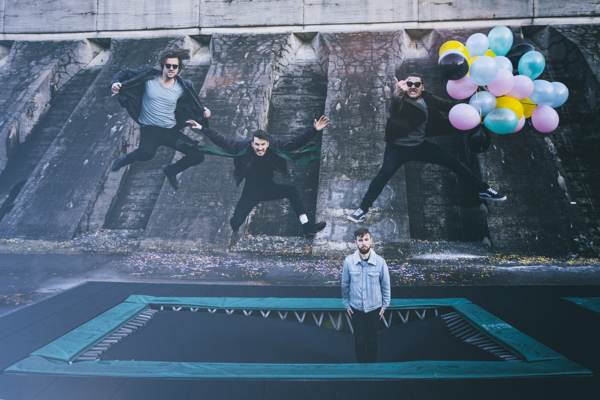 The edgy rock band from Bergen, Norway Dobbeltgjenger (members of Major Parkinson!), has released a brand new video for the track Locking My Doors. The track is taken from the band’s second album Limbohead, out now via Karisma Records worldwide.

The Progressive Aspect notes: "Dobbeltgjenger have a knack with infectious finger-poppin’ melodies, and Locking My Doors is one of those, where I might detect a whiff of David Byrne leaving the building."

Dobbeltgjenger consists of members from Major Parkinson, Ossicles, Depresno and 9 Grader Nord. The band draws their diverse influences from both the past and the present: Queens of The Stone Age, Eagles of Death Metal, Talking Heads, Led Zeppelin, Joy Division, Jeff Buckley and ZZ-Top to name a few.

Limbohead, the band’s second album was released the Spring of 2018. It is is a colorful depiction of an anxious reality, where doors are locked in order to shut out the dangerous conspiracies of the world. Paranoid themes are depicted through a varied and comprehensive rock sound and a vocal that alternates between vulnerable falsettos, punkish screams and rhythmic narratives. Limbohead, showcases a more focused band than on the debut, When I’ve Gone to Space, but the trademark musical diversity and catchy groove is still apparent.

Dobbeltgjenger is here to bring back the groove and fun to the serious and eclectic rock style. Let’s just call it futuristic retro rock.

Drawing their inspiration from everything from astronauts lost in space to old video games, Norway’s DOBBELTGJENGER was formed in the musical cradle that is Bergen in 2015. The band features an experienced and skilled lineup of musicians that include Sondre Veland (MAJOR PARKINSON, OSSICLES) on drums, Jakob Sønnesyn (DEPRESNO, 9 GRADER NORD) on bass, Vegard Wikne (OCEAN OF LOTION) on guitars and vocals, and Knut Martin Rasmussen Langeland on guitar.

Whilst the DOBBELTGJENGER ‘s 2016 debut album "When I’ve Gone to Space" was heavily influenced by progressive rock and elements of jazz and psychedelia, "Limbohead" represents a shift away from a narrow psychedelic expression towards a more eclectic sound. The end result is described by the band as a "punk-inspired, and more hands-on, record" replete with explosive stoner riffs and electric slide-guitars.

Lyrically, "Limbohead" recounts tales of deep-rooted neuroticism, a sort of colourful tapestry of an anxious reality, where doors are locked, in order to shut out the dangerous conspiracies of the world. But whilst the subject matter is serious, DOBBELTGJENGER are all about bringing back the groove and the fun to genres that sometimes take themselves a tad too seriously by using contagious grooves, a futuristic guitar sound, and soulful rock vocals that alternate between vulnerable falsettos, punkish screams and rhythmic narratives.