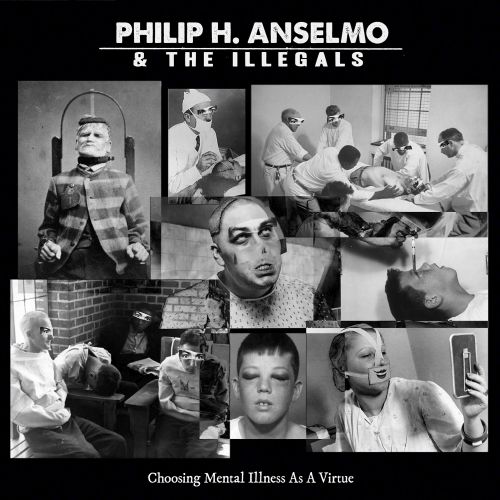 I have been dying to hear this brand new album by Philip H. Anselmo & The Illegals for a long fucking time now and it is my utmost pleasure to state that the wait has most certainly been worth it. What we are dealing with here is not something that one can just pigeonhole or classify easily in that it blends so many different elements and metal-related styles and genres of music together to such an overpowering effect that I am not even sure that I want to bother trying to label the damned thing…and neither should you!

There is plenty of venom and spite to this ugly yet riveting fucker of an album. Every tune is as explosive as it is strangely appealing. I could throw a handful of adjectives such as crushing, pulverizing, devastating, pummeling, and hard-hitting around here, but the fact of the matter is that the intensity and dynamics of "Choosing Mental Illness as a Virtue" simply has to be experienced. Words will neither suffice nor be able to sum up how heartfelt and lethal this effort truly is. Anselmo delivers one of his most passionate and raging vocal performances to date while those sharp and twisted guitars courtesy of Mike DeLeon and Stephen Taylor will penetrate your mind and soul regardless of whether you want them to or not. The violent rhythm section consisting of Jose Manuel Gonzales (drums) and Walter Howard IV (bass) is downright frightening and the whole affair sounds even more disciplined and structured than the debut offering, which is saying something. Songs such as "Utopian" and "The Ignorant Point" are utterly bleak and exquisitely caustic while the brilliant "Individual" and "Delinquent" are more bombastic and punchy. "Invalid Colubrine Fraud" defies description, so you better check that bone-crushing composition out for yourself.

The thing about "Choosing Mental Illness as a Virtue" is that it is just as interesting in terms of its thought-provoking and reflective lyrics as it is in terms of its purely musical content. It is the combination of those unnerving words and the unpredictable and wildly exciting riffs that are all over the album that make this raw and energetic piece of work such a fascinating output. It is manic and vicious at times, but with plenty of subtle details and a lot of light and shade to it too. In other words, there is nothing one-dimensional or straightforward about the record. As unsettling and unpleasant as it may seem, you need to embrace this album fully and allow it to really sink in so that it can grow on you. One cannot absorb and digest neither the music nor the lyrics the first few times around. You need to listen (and I really do mean LISTEN!) to it quite a few times before it all starts to make sense. An early candidate for one of the year’s best and most compelling records? You bet!