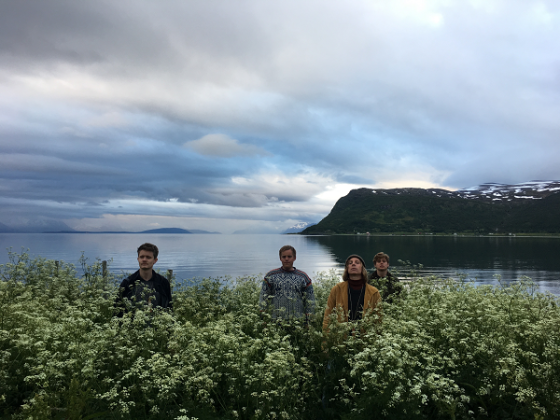 With the tape version of JORDSJØ’s upcoming album "Jord" featuring in a number of "Best Of 2017" lists, Karisma Records is off to a flying start with its 2018 releases, as the ubiquitous Bergen-based label reveals details of the album’s more conventional format release.

Replete with an underlying theme of alienation, belonging, and dreams, and following on from three cassette demos, "Jord" is considered by the band to be their first "proper" album. Whilst "Jord" makes use of flute, guitars and a vast array of vintage synths, and with a nod in the direction of 70’s Prog, Electronic and Folk, it is an album that takes on the warmth of its vintage sound, but emerges as something fresh and interesting.
Set for release on the 9th March in CD and Digital formats, and with artwork by Sindre Foss Skancke, tracklisting for "Jord" is as follows:
1 Over Vidda
2 Abstraksjoner fra et Dunkelt Kammer
3 Finske Skoger
4 Jord I
5 Jord II
6 La meg forsvinne
7 Postludium

Consisting of founder and multi instrumentalist Håkon Oftung (TUSMORKE, BLACK MAGIC ) and drummer Kristian Frøland, JORDSJØ was formed in Oslo, Norway in the autumn of 2014. The duo draw their inspiration from old horror movies, German 70s Synth music, Swedish Prog, fantasy novels and Norwegian nature, and together they create a charismatic, folk-inspired Symphonic Rock that stands out amongst the legion of Prog Bands.

Already hard at work preparing their next opus, "Jord", will be followed by what the band calls "a kind of Intermezzo" titled "Nattfiolen" which will explore more deeply the mysticism that surrounds the forest.

JORDSJØ are confirmed to appear at the Close to the Rain Bergen Prog Festival in 2018 and more information about the band can be found on Facebook at https://www.facebook.com/jordsjoe/
Past releases from JORDSJØ can be heard at https://jordsjo.bandcamp.com