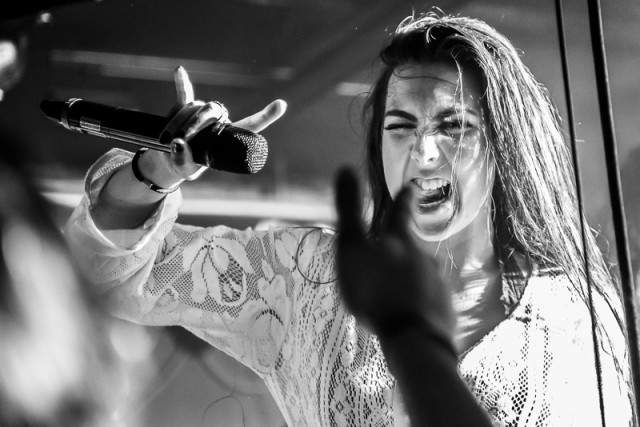 Following a long and arduous day at work involving lousy coffee, crappy colleagues, and a long line of bad decisions, there was only one solution to the whole thing; to head on over to Garage in Bergen and check out a couple of Swedish bands and see what they had to offer. The ones in question were the groovy and fierce Sparzanza and the extremely poppy Amaranthe, the latter of which is turning into a bit of a sensation among the younger metal crowd. Due to said daytime job, I missed the opening band Silver End, so unfortunately I will not be able to tell you anything about them. What I can tell you is that the turnout was great, especially for a Tuesday night. There were loads of people there, which was nice to see. The atmosphere was buzzing and people were clearly excited about witnessing the two outfits on stage. First up were Sparzanza who walked on stage to an ominous and moody intro and then plowed through a 50-minute set containing such neck breakers as “Announcing the End”, “Pine Barrens”, “Crone of Bell”, “Follow Me”, “Underneath My Skin”, “The Trigger”, “Mr. Fish”, and “Temple of the Red-Eyed Pigs”. The band is not much to look at on stage in the sense that there is not a whole lot of movement or acrobatics or anything of that sort going on, but what they do, they do very well. Their songs possess groove, cool guitar harmonies, variety, and riffs that are instantly catchy. Although it was neither mind-blowing nor fantastic, it was a very solid show and Sparzanza kept the momentum going from start to finish. They also got the crowd going. The sound was pretty rough in the beginning (at least where I was standing), but they were able to iron that out along the way. Highlights of the night were the following bombastic cuts: “Mr. Fish”, “The Trigger”, and “Underneath My Skin”.
Amaranthe live@Sandvika 2016
Photo by Aleksander Eilertsen

Amaranthe are obviously really good at what they do and people went ape-shit during their performance, so they are doing something right, of that there can be no doubt. To be perfectly honest with you, their blend of symphonic and melodic metal with loads of sing-along parts did not appeal to me that much, but, like I said, they are talented people for sure and it was cool to see so many fans enjoy the show and freak out. Utilizing three vocalists lends a certain diversity to their song material and everything was executed professionally last night, which is to say that the band were tight and passionate about what they were doing. Amaranthe clearly has a strong fan base in Norway and Bergen was a good example of that. Four encores including the catchy “The Nexus” followed the main set before the band called it a night and I dare say that the crowd were most pleased with how the show went about. Maybe I am just getting too fat and old for that kind of thing to really appreciate it, but again, Amaranthe must be on to something judging from how ecstatic the audience was when tunes such as “Boomerang” and  “Maximize” (just to list a couple of examples) were aired.