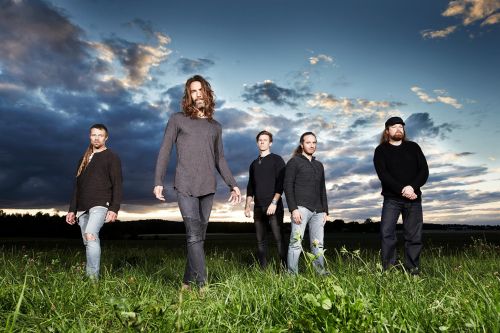 Pain of Salvation has been different from its inception. “I wanted a name that meant something, a name that was more than a cool expression. For me, Pain of Salvation has the meaning of balance.” Daniel Gildenlöw’s words strike true for more than just the name of this renowned progressive metal band. Pain of Salvation has always been about more than just music; more than just the pleasure of the beat and groove. Their music has always been more about raw human experiences, riveting tumultuous stories, and shades of good and evil. These things are cloaked in dark, progressive polyrhythms and challenging syncopations, brilliantly darkened keys, percussive muscle, and conceptual album structures. The band has a sound that is completely and uniquely their own; a recipe that is recognizable from the very first note: a big serving of enigmatic metal, a side of alternative, a dash or two of progressive rock, and lyrics that will rip your heart from your chest.

Established in 1984 by the only remaining original member, Daniel Gildenlöw (lead vocals, lead guitar); Pain of Salvation is known far and wide as one of the most vital bands in the resurgence of progressive music. Boasting incredible musicianship, a wide variety of influences, and a darkly poetic approach; Pain of Salvation has a reputation for being unpredictable, outside the box, and willing to experiment with styles, and possibly even the hearts of fans. Having gone through some line-up changes through the years, for the past 4 years the band consists of Ragnar Zolberg (lead guitar, lead vocals), Léo Margarit (drums, vocals), Daniel Karlsson (keyboards, vocals), and Gustaf Hielm (bass, vocals).

Each and every release from the band has followed the same philosophy as their name: philosophical balance and gut-wrenching human experience.

The band’s first studio album “Entropia” was released in 1997 to the perked ears of many, but sophomore album “One Hour by the Concrete Lake” in 1998 was the record that really garnered the attention of the progressive metal community. This is the album that sparked the relationship between Pain of Salvation and InsideOutMusic, culminating in the band’s first direct release with the label in 2000, “The Perfect Element, Part 1”. The band is still with InsideOutMusic to this day.

From there, Pain of Salvation only grew bigger and more popular on the international stage. Released in 2002, “Remedy Lane” is perhaps the definitive album from the band, hailed as an absolute masterpiece by many. The album turned the personal level up to ten with an incredible look at grief and ruin, all in the guise of a damaged sexual affair. Switching gears in 2004, however, the band stepped outside the ordinary and released what is still one of their most controversial albums, “BE”. Examining the human experience in relation to God and our tendency towards ruin and destruction, the album was mathematically ambitious, leaned towards progressive rock, and contained almost none of the metal for which the band was known. The album was initially performed live in its entirety before the official studio album released.

Additionally, it was released as an ethereal and captivating live experience, which is still one of the most legendary progressive metal DVDs to this day. The last decade has seen Pain of Salvation in a very busy schedule; whether touring, releasing albums and live DVDs, or simply taking a bit of a break due to band members parting ways. They released the heavier “Scarsick” in 2007 to the praises of the progressive community, but decided to stretch themselves for the next two releases. The band offered “Road Salt One” in 2010 and “Road Salt Two” in 2011, escaping their metal roots to more of a hard rock or progressive rock bent. Softer, folksier, and even a bit stranger, the successful “Road Salt” albums showed the band’s passionate desire to think outside the box and to try new things. Fans that are willing to stretch their own boundaries have found Pain of Salvation to assist in music maturation, and stretch one must in order to keep up with this band.

“Road Salt Two” was the last true studio album from the band. Outside of some EPs and an acoustic album of reimagined tracks and covers called “Falling Home” in 2014, the world has been left to wonder what is next for this dynamic, aspiring leader in progressive music. The community would never be the same without the band that helped carry the torch of progressive music through the 90’s and beyond. Pain of Salvation has answered that call with two new releases. Their new offering in July 2016 was an updated version of their classic album “Remedy Lane”, this time “Re:mixed” and “Re:lived”, denoting the remix of the original album and then a very special full-album live set from ProgPower USA 2014.

Now the band is getting ready to reveal their upcoming album “In the Passing Light of Day” to the world in January 2017, and its creation and atmosphere is inextricably linked to the near fatal illness that Daniel spent much of the first half of 2014 recovering from. He comments: “I came there with the first snow, and when I left it was almost summer. When I got out, I had to learn how to walk stairs. I did NOT, however, learn that I need to spend more time with my family. I did NOT learn that I should spend less time of my life worrying and stressing. I did NOT learn that life is precious and every second of it counts. No, I did not learn those things – simply because I already knew them by heart. We all do. Our priorities do not change in the face of death, they just intensify. We get reminded of them. Suddenly, painfully, honestly, we remember how to live.”

As a result, the new studio album, which was produced by Daniel Bergstrand (In Flames, Meshuggah, Devin Townsend) at a.o. Dugout Studio and co-produced by Daniel Gildenlöw & Ragnar Zolberg, is an altogether darker and impassioned journey, and certainly one of the most ferocious collections of songs that have born the Pain of Salvation name to this day. Taking the hospital bed as a narrative hub, the lyrical and musical themes touch on all the conflicting feelings that run through a person’s mind when presented with the prospect of death and the passing of life. Daniel continues: “What started off as an annoying infection has, in just hours, suddenly pivoted into the very real possibility of my actual dying.” That’s not to say however that all this record presents is blackness. “This album also shows the beauty of the transition, of the inevitable. And of the hope of a tomorrow, the hope of change, no matter how frail and naive that hope may be.” In the past 6 years since the release of ‘Road Salt Two’, fans hope for a new Pain of Salvation has truly been tested. But their perseverance, as well as that of Daniel and his band has been rewarded with one of the most stunning albums of their career.

HARAKIRI FOR THE SKY – new album,video and tour dates