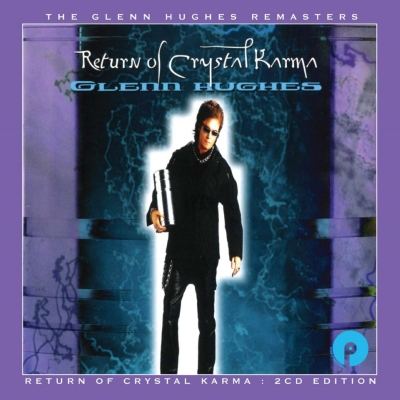 The excellent albeit overlooked album by legendary vocalist/bassist Glenn Hughes entitled "Return of Crystal Karma" was recently reissued featuring the original studio album from 2000 in remastered form along with a kick-ass live show that was captured on tape in Brazil back in 1999. For some reason, the album never really received the recognition that it so surely deserved, at least from my perspective. It never felt as if that many people picked up on it when it was released, but we can all rejoice as it is now available again with a lot of cool stuff added to it, namely the aforementioned live show and some fascinating liner notes, but we shall get back to that later on.

Backed by a stellar crew of musicians who can definitely hold their own, Glenn Hughes is a raging monster on "R.O.C.K." and that is meant as a huge compliment. That booming and powerful voice of his that covers everything from the fragile and melancholy to aggression and anger is simply amazing to immerse oneself in. I have no idea how he does it, but I reckon he must be in possession of some strange and hitherto unclassified vocal-gene originating from somewhere far beyond the grasp of us mere mortals. The fact that the band more or less recorded the tracks live in the studio together provides the album with a wonderfully dynamic vibe and a delightfully groovy atmosphere. The song material stands up well and has lost none of its power or drive. In fact, there is something refreshing about listening to this great disc again and underrated gems such as "Switch the Mojo", "Gone", and "The State I’m In". The quality of the songwriting simply speaks for itself and the way in which those memorabe riffs, moving vocals, superb melodies, and haunting undertones of longing are woven together and allowed to breathe and soar is truly a pleasure to listen to.

As I stated earlier on, the booklet and liner notes are simply awesome and there is some valuable insight into the recording of the songs and the recording of the album to be found within those pages. The record does require that you listen to it a number of times before everything starts to fall into place, but that is the beauty of it; it is one of those discs that one can return to again and again. Perhaps one of the greatest things about "Return of Crystal Karma" is that it bridges the gap(s) between the many different releases that Hughes has participated on ever since the early days of Trapeze. While one can definitely draw parallells to the funk-like qualities of those three classic Deep Purple records that Glenn appeared on, there are links and nods to "Seventh Star" by Black Sabbath as well as the more soulful and mellow solo albums by Hughes, one obvious example being "The Way It Is". In other words, the album strikes a nice balance between the hard-hitting rock parts and the funk- and soul-inspired ones that permeate large parts of the Glenn Hughes discography. In that sense, "Return of Crystal Karma" is not a bad place to start if you have never encountered the brilliant and creative mind of Glenn Hughes before. It nicely summarizes the many different aspects and moods of his sound and style. And before I forget, the six live cuts that constitute the second disc all slay and sound excellent, both musically and in terms of the interplay between the different members of the band. The fact that the underrated Sabbath classic "No Stranger to Love" is aired is more than enough reason for you to invest in this awesome 2CD release. All hail the mighty voice of Glenn Hughes!

WOLFGANG FLÜR – I Was a Robot – book