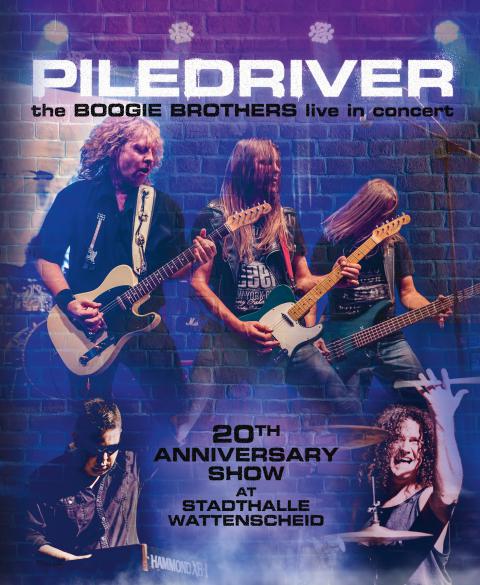 Truth be told, I was neither impressed nor blown away by Piledriver’s 2016 release entitled "Brothers in Boogie". Therefore, I did not exactly have high expectations to this new live package of theirs appropriately titled "The Boogie Brothers Live in Concert" when it landed in my pile of stuff to review. Luckily, it turned out to be more entertaining than last year’s lackluster album. Having said that, I am still not convinced or impressed by this German outfit.

First of all, this package consists of a Blu-ray disc as well as 2 CDs and 23 tracks in total, 22 of which form part of the live show and then one exclusive bonus cut named "Julia". Boasting a crisp picture and a crunchy sound, there can be no doubt that the production is really strong and that some time and effort went into mixing and editing this fucker. While the sound is clear, powerful, and in-your-face, it is not clinical and certainly not devoid of life. So far, so good.

When listening to the CDs and watching the concert it is quite evident that there is a certain energy on stage and that the band enjoys performing its material in front of an appreciative crowd. Piledriver is tight and the musicians are competent, so no complaints there. The two opening tracks are cool, more specifically "Frantic Groove" and "One Way to Rock", but the next four cuts are meandering and lack any sense of excitement or climax. "Together" and "Rock in a Crossfire-Hurricane" are dreadful. The next seven tracks are covers of classic Status Quo songs and they are quite entertaining and fun to listen to, much more so than the band’s own material. Piledriver’s renditions of cuts such as "Hold You Back", "The Wanderer", and "Roll Over Lay Down" are strong and booming, full of life and vigor. From thereon everything kind of ebbs and flows, which is to say that the Status Q covers such as "Little Lady", "Whatever You Want", and "Down Down" are cool to sit and nod along to while the band’s own compositions simply pale in comparison. In that sense, the whole damn thing is a bit of a mixed bag, which is fucking frustrating. At least the live show ends on a high note with a rocking version of "Bye Bye Johnny" before the exclusive studio bonus track, the one titled "Julia" as mentioned earlier on, makes an appearance, but that particular song is also a tame affair.

"The Boogie Brothers Live in Concert" will be a treat for fans of the band and perhaps also of boogie rock in general. After all, it does contain a Blu-ray disc, two CDs, and some extra features not to mention a bonus track, so you definitely get some value for your hard-earned bucks here. It is nicely filmed and the CDs sound great from a production standpoint. However, if you are neither a fan of the aforementioned genre fan nor a Piledriver die-hard then you can rest easy; you are not missing out on anything.