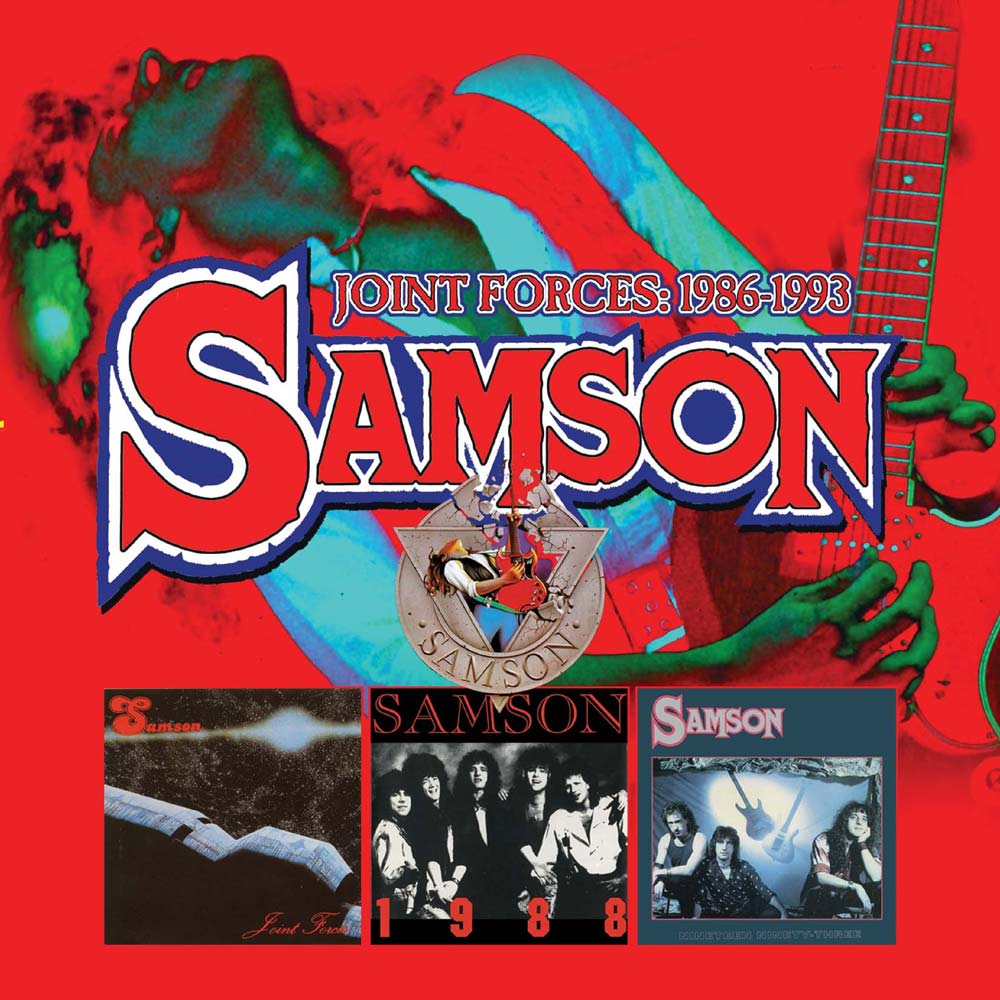 The ever-reliable HNE Recordings recently released this killer 2CD expanded edition by the legendary NWOBHM outfit that is Samson and we might as well start out by stating that you ought to pick up on this if no-frills, old-school metal drives you crazy. While the 16-page booklet filled with interviews and sleeve notes and so on is a thing of beauty, what is truly great about this release is the wonderful remastering of those 32 killer cuts that constitute this release. The album bearing the name "Joint Forces" was originally intended to be a Paul Samson solo album, but common sense prevailed and it was released as a Samson album. "Joint Forces: 1986-1993" contains the aforementioned album as well as the "And There It Is…" EP, a slew of songs from the "1988" compilation, and the entire self-titled output from 1993 (also known as the "1993" album in certain territories).

In short, "Joint Forces: 1986-1993" is filled to the brim with memorable and well-written tunes that perfectly encapsulate everything that makes heavy metal great, but since Samson never really made it to the top of the ladder from a purely commercial perspective, many of their songs and releases have slipped under the radar or simply been overlooked by the wider heavy metal audience, which is a damn shame. Hats off to HNE Recordings for unearthing and bringing these recordings back to life again, eh? Rousing fist-in-the-air songs such as "Tales of the Fury" and "The Chosen Few" are crammed with galloping bass, crashing drums, and great harmonies.

"The Russians Are Coming" and "Good to See You" are headbanging bliss while "Reach Out to Love" and "Dream" are quite moving yet devoid of pompous balladry. There is something lively and spirited about these tracks that is simply charming.

For some bizarre reason, the band never really received the recognition and praise that they so surely deserved. Renowned and skilled musicians such as Thunderstick, Bruce Dickinson, and Clive Burr all trod the board with the band, but sadly Samson are way too often pushed to the margins of the NWOBHM chronicle. The fact of the matter is that they were way better than most other pure heavy metal and NWOBHM acts that were around back in the day. Even though "Joint Forces: 1986-1993" does not contain any material from the first few classic albums, many of the songs from the late 80s and early 90s era(s) have held up incredibly well; they still pack a punch and sound suitably denim-soaked in 2017. Paul Samson was a highly talented guitarist, vocalist, producer, and songwriter; "Joint Forces: 1986-1993" is testament to that.