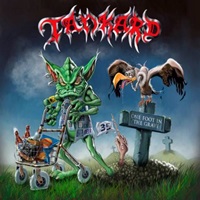 TANKARD – One Foot In The Grave

Best known as a beer-fueled outfit with many lyrics championing a love for alcohol, Tankard are veterans of the thrash genre – as "One Foot in the Grave" is the group’s 17th  studio album since 1983. This time tackling some serious topics for "Arena of the True Lies" (discussion of internet ‘click bait’ and fake news) plus "Syrian Nightmare" beyond continuing their traditional humor/alcohol oriented songs they’ve become well known for, people forget that these songs really embody the true strength and might of classic thrash.

Gerre’s barking and master of ceremonies delivery makes "Pay to Pray" and "Lock ‘Em Up" instant standouts – the latter also containing a killer mid-tempo groove transition that probably propels bodies should the band choose to add these staples to the live show. "Sole Grinder" is a tribute to long-time manager Buffo, containing stories from the band’s history – while "Secret Order 1516" as the longest cut at 7:27 features an eerie keyboard/chanting intro, frenzied speed changes that can be punkish, plus a group chorus and guitar instrumental action that reaches back into Iron Maiden/NWOBHM territory.

Will Tankard ever be considered pioneers at their art? Maybe if you want to look into the ‘crossover party’ segment of the recent revival that Municipal Waste spearheaded, possibly. There’s something to be said though for an early 80’s thrash act that stay the course, appealing to a blue collar, down to earth segment of the population who just want to have a good time and not think deeply about the music they crave. "One Foot in The Grave" contains enough hooks, riffs, and choruses to not dissuade the legions already into the band, and possibly could impress some fence sitters into the fold.

A logical follow up to "R.I.B.", Tankard achieve consistency without sending shock waves into their community.