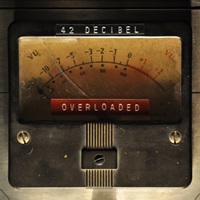 Argentina’s bluesy hard rock act 42 Decibel come back for their third album "Overloaded" – cranking their amps up to ten and delivering a record chock full of anthems sure to go down a storm at any alcohol-fueled event where loud music is the norm. Hitting the red zone intentionally with their meters in the studio, cuts like "Whiskey Joint", the slower, swanky "Brawler" and thunderous "Half Face Dead" whirl by with the passion of a youthful AC/DC in their Bon Scott-led prime, just put through a slightly dirtier posture.

Guitarist Billy Bob Riley uses slide guitar extensively to add to the bar room boogie antics, digging into the deeper Texas-oriented feel for "Lost Case", while his work with fellow axe man Junior Figueroa makes for a deadly foundation template on more mid-tempo affairs such as "Dangerous Mess" and "Cannon Fodder", two instant toe-tappers due to their catchy musical hooks. Junior has that Bon Scott drawl and personality quirks down as well – dripping with adrenaline to provide word fuel to the fire. And for those that seek out a little more extended blues runs with their hard rock, look no further than the almost seven-minute "Double Itch Blues" to get that jam-oriented fix.

42 Decibel may be considered retro or throwback – but to these ears, bluesy hard rock has been a staple in the scene for decades for a reason. You can’t kill rock ‘n’ roll acts like AC/DC even if you tried – thus there will always be heirs to the throne, which this quartet are on the path based on their solid discography. "Overloaded" hits the brain and body like a ton of bricks, achieving its party-oriented, good time aim every listen.