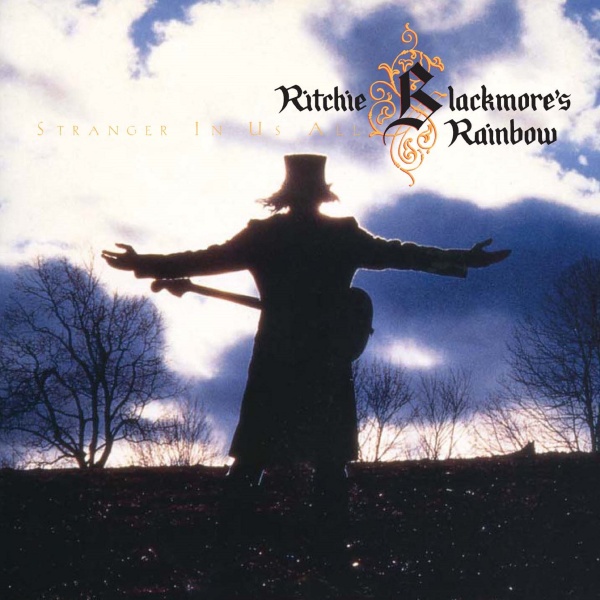 RITCHIE BLACKMORE’S RAINBOW – Stranger in Us All (Expanded Edition)

"Stranger in Us All" by Ritchie Blackmore’s Rainbow is one of those sadly overlooked and underrated gems that ought to be worshiped and cherished by all of you lovers of hard rocking music out there. When Blackmore relaunched Rainbow following his exit from Deep Purple, he put together an extremely impressive line-up consisting of some highly talented players. While the band did very well in Europe and Japan and so on, things suddenly ended in 1997 and Rainbow was no more and would lay dormant for nearly twenty years before Blackmore felt the urge to play rock music again. Either way, it has always bugged the hell out of me that "Stranger in Us All" has never received the recognition that it so surely deserves.

"Stranger in Us All" sounds just as sharp and brilliant as it did more than twenty years ago. Every song is instantly catchy, memorable, and begging to be played live in front of a rapturous audience. Singer Doogie White sounds phenomenal and there is just no faulting that voice of his. Not only are his vocals stunning, but the level of emotion and passion that is on display here is so prevalent that you can almost reach out and touch it. Greg Smith (Ted Nugent, Alice Cooper, Joe Lynn Turner, etc.) shines on this disc as well. His beefy and powerful bass lines coupled with John O’Reilly’s powerful drumming is a match made in…well, perhaps the phrase should be over the rainbow here as opposed to in heaven? Paul Morris provides some excellently atmospheric keyboards to the proceedings while Ritchie Blackmore is simply inhuman as usual. The cool thing is that Blackmore sounds truly inspired on this record as does the rest of the band. On top of that, this version of Rainbow and "Stranger in Us All" in particular was much more in line with the Rainbow of old (i.e. the first three studio albums) compared to the other eras of the band, so there is a lot to love about this one.

Cuts such as "Ariel" and "Cold Hearted Woman" are moving and intense while "Too Late for Tears" and "Wolf to the Moon" are simply hard-rocking classics in my book and right up there with the best of them. "Black Masquerade" is a pretty epic and majestic song that benefits from strong melodies and superb keyboard work. The groove of "Hunting Humans (Insatiable)" is to die for while the cover version of The Yardbirds’ "Still I’m Sad" serves as a fitting ending to the album. The latter is quite interesting from a historical perspective given that Rainbow covered the song on its debut album although that was only an instrumental version. This time around, vocals and lyrics have been added, kind of like Rainbow did when they performed the cover tune back in the 70s with Ronnie James Dio at the vocal helm. Brilliant!

The three bonus tracks are a great addition to any Rainbow fan’s collection. The Japanese bonus song entitled "Emotional Crime" is entertaining and addictive while the radio edit version of "Ariel" is great although I must say that I prefer the full version. The third one, which is a live version of "Temple of the King" recorded in Sweden, is exceptional. It sounds so dynamic and beautiful here.

Hats off to Cherry Red Records for re-issuing and expanding this overlooked masterpiece and putting it out there again. This deserves much more praise and respect than it has received so far. Excellent stuff! On a final note, this expanded edition comes with extensive liner notes that feature a personal account from singer Doogie White as well as artwork and memorabilia from Doogie’s very own Rainbow collection.