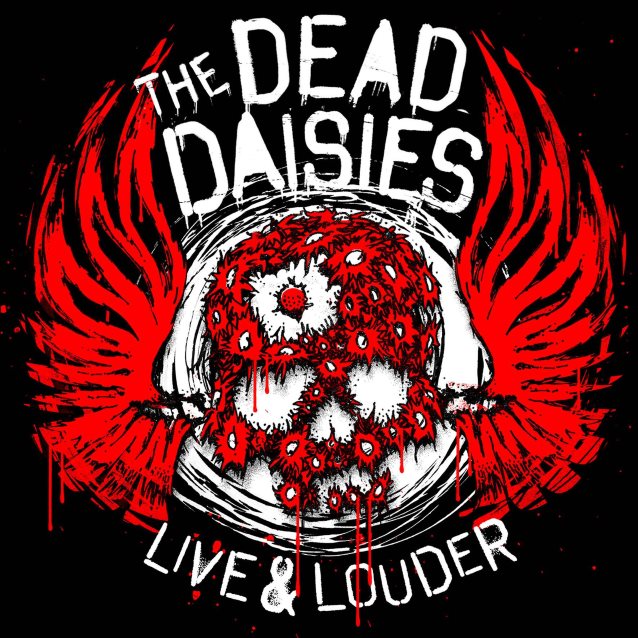 The awesome hard rock ensemble known as The Dead Daisies has garnered quite the reputation these past few years for being a kick-ass rock band with a sense of danger and excitement to it. Boasting an impressive line-up consisting of Brian Tichy (Foreigner, Whitesnake, Ozzy Osbourne) on drums, Marco Mendoza (Thin Lizzy, Whitesnake) on bass, Doug Aldrich (DIO, Whitesnake) on guitar, John Corabi (Motley Crue) on vocals, and David Lowy (Mink, Red Phoenix) on guitars, it should hardly be surprising to anyone that this 16-track live package entitled "Live & Louder" is an epic and glorious testimony to everything that we all love and cherish, i.e. kick-ass rock ‘n’ roll performed with passion and joy.

"Live & Louder" encapsulates what the band is all about, namely great hooks, memorable riffs, awesome vocals, pounding drums, and punchy bass lines. In other words, we are dealing with loud and life-affirming classic rock with a timeless and authentic vibe to it performed by world-class musicians. Recorded during the band’s successful UK/European campaigns in 2016, the album contains different cuts spanning the entire discography. I like the fact that the tracks have not all been culled from one single concert but instead from different cities and venues and so on. That way, it feels like a musical journey across the European continent.

Opening with the anthemic "Long Way to Go" is a great move in that one is immediately sucked into the wonderful atmosphere that is a Dead Daisies gig. John Corabi is in great shape and sounds totally immersed in the music. Aldrich and Lowy are goddamn geniuses on the guitars, and the insanely heavy and tight rhythm section consisting of Brian Tichy and Marco Mendoza is a wonder to behold and listen to. Highlights include "We All Fall Down", "American Band", and "Make Some Noise". The aggressive and pummeling "Helter Skelter" sounds delightfully heavy and crunchy while "Song and a Prayer" is full of soul and emotion. That goes for "Something I Said" as well. "Fortunate Son" is another favorite of mine. Just all around great stuff! One thing that all the tunes have in common is that they stick in one’s mind and that they are absolutely begging to be performed live.Good thing we now have this live package, eh?

I cannot detect a single overdub on this disc. Everything sounds raw and honest. In many ways, that is why "Live & Louder" works like a charm. The dynamics and otherworldly atmosphere of the album harken back to some of the classic live albums of the 70s, which is obviously a huge compliment. The Dead Daisies is one of the great classic rock outfits of our time and "Live & Louder" captures the band in all its ragged and inspiring glory. Truth be told, I actually prefer this one to their studio albums due to the energy that is on display here. If you long for a worthwhile live assault to lose yourself in then look no further – "Live & Louder" is it! Different formats of this fucker will be released (this review merely focuses on the CD version), so check out the Dead Daisies website for more info.

RITCHIE BLACKMORE’S RAINBOW – Stranger in Us All (Expanded Edition)