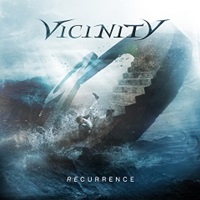 Progressive metal has gained major momentum in Norway – probably due in part to the impact of Pagan’s Mind, Leprous, and Circus Maximus to name a few. Vicinity aims to add themselves to that list of must hear bands, as "Recurrence" is their second full-length and follow up to 2013’s "Awakening". At six songs and over an hour in total, there’s plenty to digest if you are a fan and follower of dynamic interaction between musicians, longer than normal instrumental sections, and diverse mood/tempo changes.

The overall air about Vicinity has that lighter, melodic progressive metal feel – where the keyboards are as important as the guitar measures, and the rhythm section provides much of the energy pulsation through tight fills and seamless time signature juggling. "Phoenix" contains numerous floating keyboards over cascading, Alex Lifeson-ish guitars as vocalist Alexander K. Lykke glides through his multi-octave register that contains many AOR/progressive rock reference points (Threshold and Kansas coming to mind the most) – a thrilling 10-minute plus joyride. Commercial harmonies become front and center in the early verses of the follow up "Mountainfall", a musically adventurous affair that feels very circular to expand outwards between the dynamic drumming and stair step energy level of the composition – aligning themselves with Pagan’s Mind and Threshold. Wisely breaking up many of the longer tracks with shorter affairs such as "Extinction" and "Immaterial Failure" proves Vicinity know how to tighten the progressive reigns while still being forward thinking – keyboardist Ivar Nyland and guitarist Kim-Marius H. Olsen twisting and turning in a playful manner though the former, as the latter explores more subdued, semi-ballad territory in lush overtones to allow Alexander the grace to hit a mid-range stride.

The final song "The Long Goodbye" almost takes up a third of the record, a 22:26 sprawling epic that starts with piano and vocals (Steve Walsh would give kudos to the upper note boldness), shifting to an emotive guitar break before the full progressive metal extravaganza begins. Early Enchant memories sift in for the specific riffs and momentum of the arrangement – drummer Frode Lillevold channeling everything from Neil Peart to Mike Portnoy for his vast tool box of tricks, hits, and kicks. Pushing things to the limit lyrically as well, the cyclic nature of humanity is tested and questioned – ample food for thought to match the musical proceedings.

"Recurrence" deserves accolades for its superior talent base and ability to keep hooks in mind against all the musicianship at play. Vicinity are an impressive progressive metal band for sure.