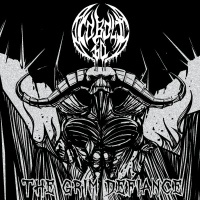 As Daniel "Død" Olaisen revealed in a private conversation, the cryptically monickered Cobolt 60 is a purposely underground project which releases an album every 10 years and this here "The Grim Defiance" is a second in their discography. The band started as a side project of Død, Blood Red Throne and Zerozonic gutarist, and with its thrashened black/death metal differs significantly from his two other babies, although the common denominator in all three projects is fascination with 90s Pantera, always a plus to this reviewer.

Musically, though solidly based in primeval black metal, Cobolt 60 explores Immolatory death metal and doom (title track, Hammer the Creationist, The Return of Theia) with liberal helpings of thrash, hard core and aforementioned Panteric groove (Hammer, Sort, You Are, Therefore You Die), viking melodic death metal a’la Amon Amarth (Radiant Animosity Towards The Flesh, that ending is sweet), punk (Beinkald) and some Motörheadian heavy punk. "Hammer the Creationist" a primary example of a skillful medley of black, death and thrash to the point of indivisible hybrid, and the best track on the album, the closer "You Are, Therefore You Die" (summary of our pointless existence or an excuse to hate kill?) is a five in one:  black, death, thrash, punk and hard core atop Deathspell Omegian vocals, as if Cobolt 60 was ahead of the now increasingly popular hybrid metal genre. There’s something for everyone on "The Grim Defiance".

Personally, I would love to hear them expand more on that Panteric groove in 2022 and significantly tighten up the songwriting as there is a multitude of great moments and ideas but the songs tend to blend together to such a degree that I was surprised how "Hammer" seamlessly gave way to "Return" as the two sound like one long song. Perhaps they were going for a type of "Possessing the Angels/Spirits of The Future Sun" transition after Soilwork on "The Chainheart Machine"? In any case, "The Grim Defiance" is a good harbinger of things to come around my 47-th birthday.