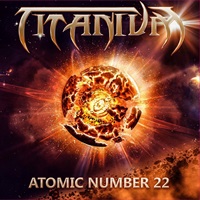 Recently hitting my radar screen, there’s nothing like Euro-power metal to set the sky on fire and give off this burst of energy for followers of the genre. Especially if names like Stratovarius, early Edguy, and Sonata Arctica meet the mark in your collections – Polish quintet Titanium will be another band to cherish. Together since 2010, "Atomic Number 22" is the second full-length and provides close to an hour’s worth of material that encapsulates the happy harmonies, bursts of guitar speed, and flair for the dramatic necessary to come off convincingly.

The keyboard orchestration against charging guitars and double bass makes you want to sing right away, knowing you are onto something special – which is what you’ll get on "Defusive Skies" for sure, beyond the opening title cut as well. Marching strains, blitzkrieg/frantic lead breaks, a guest appearance from Iron Savior main man Piet Sielck vocally on "Guardians of Might" – and large choruses filled with magical, uplifting vocal harmonies create numerous highlights, "One Single Night" and "The Way of the White Flag" two that come to mind. Titanium aren’t creating anything new to the genre so to speak – the obvious affinities for Stratovarius and early Sonata Arctica are ever-present. And yet this is so addictive, because the proper hooks, accents, melodies, harmonies, and speed come together as one.

"Atomic Number 22" gained a Japanese release through Avalon, but remains independent elsewhere, which seems very confusing to these ears. There are plenty of people who still worship at the altar of "Visions", "Destiny", and "Ecliptica" – and as such, Titanium fill that void for the current listeners who savor those albums.