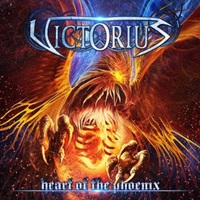 VICTORIUS – Heart of the Phoenix

There’s something magical when the stars align and all the components take shape to make power metal the uplifting, uniting style that it can be. Germany’s Victorius live up to those ideals on their fourth album "Heart of the Phoenix", keeping the songs tightly energized, thematically creating melodies and hooks that on every front make you want to sing along and become a part of the proceedings. It’s difficult to mix up outside influences to create your own mark in this genre – but for Victorius, it’s more about playing to your strengths and letting the drive take you where you need to go.

Happier riff foundations and big vocal choirs beyond the double bass and call to arms keyboards make "End of the Rainbow" and "Hammer of Justice" two standouts on initial passing, while "Shadowwarriors" contains the added surprise of blast beats from drummer Frank Koppe against his conventional power house tempo delivery. Guitarists Dirk Scharsich and Florian Zack stack up tasty twin rhythms as well as exemplary breaks that can be very melodic or shred-oriented, also fluctuating depending on the feel and speed at hand. Check out "Hero" and "Beyond the Iron Sky" for the fleet picking and shifting needs these gentlemen can deliver. When the group chooses to be a little more mid-tempo, there’s still this chugging foundation that puts Victorius in more of a see-saw battle between Freedom Call/Hammerfall and the Brainstorm/Mystic Prophecy camps – "Sons of Orion" another tremendous cut due to the guitar buildups/transitions and an addictive vocal compliment from David Baßin along with a lead break that features twin electric folk-ish gallops.

Assembling the right team around them in terms of production (Lars Rettkowiz/Freedom Call), mastering (R.D. Liapikis/ Mystic Prophecy) and cover artwork (Stan W. Decker – Masterplan/Battlecross/ Serious Black) provides the final icing on an already delectable product. Another Euro-power product sure to appease those into the genre, and hopefully indoctrinate the new generation as well.