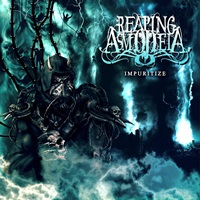 Minneapolis, MN may be known for bitterly cold winters, but it’s also home to this technical death metal unit Reaping Asmodeia. Together since 2013, they self-released their debut album "Poison of the Earth" a year later- supporting the record across the United States on tour with acts like Abiotic, Beyond Creation, and Boris the Blade among others. Moving up the ranks to Prosthetic, the follow up "Impuritize" contains a treasure trove of smoldering intricacies, dominant, low-tuned grooves, and insane blasting/ scream / growl combinations that mesmerize while pummeling all senses into oblivion.

Vaulting Roman Pinter bass solo play at 3:00-3:07 differentiates closer "Ritual of Ignorance", while the duality screams/growls opens vocal versatility right out of the gate on the speedy "The Clemency Guise" – the band exploring some Meshuggah meets deathcore breakdowns during the transitions. Samples and short interludes often set up the next audio salvo, while twin guitar lines of shredding thunder take "Defenstration" into guitar maven worship central, Alexander Drake Kelly unleashing the arpeggio licks and tapping tricks at his disposal as the drumming from Daniel Koppy goes from mega blast to snare slamming /double bass groove intensity measure to measure. Throughout the record, there are segments that the average consumer can latch onto, while also understanding that to fully process the contents of every nuance available, expect a solid 20-30 playbacks. Reaping Asmodeia as a band aim to shake up the foundation of the tech death metal movement, taking breakdowns to another level without succumbing to a lot of the same tricks and combinations that have been done ad nausea.

Normally not my favorite genre to tackle, "Impuritize" makes the grade because of the smart cross-pollination on display. Intricate, technical, speedy, brutal – and even melodic in spots, Reaping Asmodeia deserve the accolades bestowed upon them, and should be a fine addition to your collection when you need some blood boiling, rip your face off material.