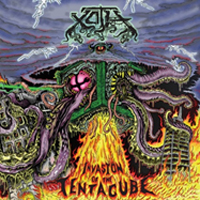 XOTH – Invasion of the Tentacube

Xoth are one of those ‘great but low profile‘ bands that it is all too easy to miss or pass up on with the slew of releases coming out each week. In fact ‘Invasion of the Tentacube’ was quietly released in late 2016 to minimum fanfare. Hopefully this review will help bring the band to a few readers attention.

As you can see from the cover, Xoth are strongly into their science fiction and HP Lovecraft. Who isn’t? As far as I am concerned neither of those ever get tired for me. Musically, this is death thrashing insanity with a few progressive elements like Ben Bennett’s slappy bass sound (some readers might remember Ben from his Warbringer days). The technicality of the twin guitars shines through too. At times, the sound reminds me of Absu, although the feel and vibe are quite different, the vocals are similar and the short bursts of high speed drums and riffing would certainly not sound unlike Proscriptor and his crew.

Xoth are tight as tight can be, full of energy and a drive to prove themselves and given that this is a debut album, it is a very safe bet to state that if these guys stick together and get the breaks they deserve, then we’ll be hearing some great stuff from them.