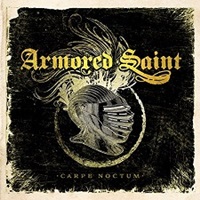 Considering a new studio album from California traditional metal band Armored Saint comes around the band every five to ten years (the last gap between "La Raza" of 2010 and "Win Hands Down" from 2015), it’s not surprising that the band wish to capture some of that live energy and release "Carpe Noctum". The last live album from the quintet came in 1989, and wisely choosing to capture a mixture of material from Wacken 2015 and another headlining show appearance in Aschaffenburg, Germany – you will give eight songs spanning a wide birth of their catalog.

The newer material like "Win Hands Down" and "Mess" goes down just as well as classics like "March of the Saint" and closer "Reign of Fire" – but the true surprise is "Aftermath", always one of the better deeper cuts from the severely underrated "Delirious Nomad" record. The brotherhood within these musicians stands the test of time – there’s no deny the grit and primal delivery of vocalist John Bush, the pounding skin work of drummer Gonzo Sandaval, and the strong background vocal support and proficient bass play of Joey Vera. Add in the dual rhythms, counterpoint offerings, and killer lead skills of guitarists Jeff Duncan and Phil Sandoval and it is little wonder why the band didn’t break through like many of their 80’s contemporaries.

The crowds roar in approval, supplying complementary unison chorus work when called for (or sometimes spontaneously). Gaining more appreciation these days based on the timeless nature and attention to detail in terms of focused, tight songwriting, they can deliver- 38 minutes later you’ll probably be returning to the beginning to take in the energy once again. If you’ve yet to invest in any Armored Saint studio discs, "Carpe Noctum" could be that window into what makes them so special – why they’ve developed a diehard fan base and keep cruising along to their own muse.