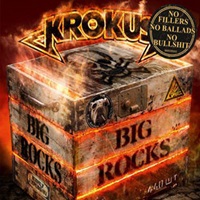 Swiss hard rockers Krokus have been a part of the music scene for over 40 years, and decide on this go around to pay tribute to a lot of artists that influenced their outlook and sound. "Big Rocks" as such will have a lot of familiar material to those who follow the rock music of the 60’s and 70’s, as you get a mixture of bands from the Troggs to Led Zeppelin, The Who to Steppenwolf, and even a few deeper surprises like Neil Young’s "Rockin’ In the Free World".

What’s delightful regarding the recording itself is the old school, plug in and play aspect that the band choose to deliver. In a day and age where separation of parts, punching in, and computer enhancement seem to be the norm, Krokus choose to let the instruments meld together in a full band outing, together as one. This allows for significant magical moments on "Big Rocks", including the guitar breaks through "The House of the Rising Sun", as Fernando von Arb, Mark Kohler, and Mandy Meyer showcase their deep bluesy affinities. It’s hard to outdo Led Zeppelin, but the big voice of Marc Storace is up to the task on "Whole Lotta Love", catching all of the Robert Plant charm and upper register playfulness. They also do a brief snippet of Black Sabbath’s "N.I.B." that gives way to the mighty Queen and "Tie Your Mother Down" – not really surprising that many of the British greats helped shape Krokus’ focus on heavy hooks with swinging, pocket tempos and melodies.

They choose to rework one of their own songs as well "Backseat Rock ‘n’ Roll" from 1980’s "Metal Rendez-vous", ending the album on a potent note with jam-worthy guitar licks against this AC/DC-ish mid-tempo pounder. Sure, many want another studio album from Krokus – but "Big Rocks" does indeed live up to its title, and should delight most of the faithful.

SHAARIMOTH – Temple Of the Adversarial Fire