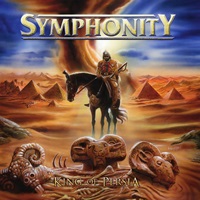 Containing two of the premiere vocalists in the melodic metal business with Olaf Meyer (ex-Luca Turilli, ex-Dionysus) and Herbie Langhans (Avantasia, Sinbreed), Symphonity return after an eight-year absence for this second album "King of Persia". Perfectly understandable, especially given the sudden death of bassist Tomas Celechovsky in June of 2012 which took some time to process and recover from. Signum Regis bassist Ronnie König took his place, and we now have a ten-track album of symphonic-oriented melodic metal that features drama, power, and impressive musicianship.

You’ll hear thunderous double bass, uplifting material that gets people out of their seats like the charging opener "The Choice" as well as brooding ballad work in the Kiske-Helloween tradition with "A Farewell That Wasn’t Meant to Be", hallmarks of the diversity Symphonity present to keep listener interest on high. Unison neo-classically charged runs between guitars and keyboards elevate the energy, while the tradeoffs depending on the song between Olaf and Herbie provide a wide array of melodies, from low grit to high note-holding abilities. The immediacy of a guitar hook and matching it up with the right chorus for "Flying" pushes this particular song into a career highlight, something that would have been arena filling material a la TNT or others in that late 80’s ilk. At other times the instrumental chops throw down more of a Stratovarius component, as you’ll get in the 7:12 "Children of the Night" where the riffing is super tight, the lead breaks very Yngwie-inspired, and the keyboards/ drums going for propulsive gold.

Closing the proceedings on the nine-minute plus title track, it’s not surprising that the set-up has all of the orchestral flair and exotic segments necessary to transport you back in time – something that fans of older Rainbow or Dio would treasure as this epic arrangement has all of the requisite versatility, switch ups, and power fans desire in this genre. This sextet with members across mainland Europe and the Czech Republic made the long-wait worthwhile on this record – melodic metal, epic metal, power metal, symphonic metal – it’s all in there and executed flawlessly.