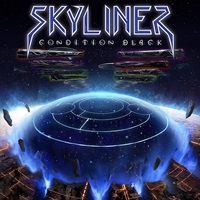 Florida power/progressive metal trio Skyliner return for a second full-length "Condition Black", another hour-long odyssey into terrain that combines Maiden/ Running Wild gallops and cultural musical hooks with occasional extreme nuances to flesh out the ideas. Guitarist Jake Becker has a baritone range that vocally gives "Too Many Voices" and the Iron Savior-ish closer "Your Hand in Mine" a dramatic, epic nature. Darker chord constructs make "No World Order" a 7:54 delight, modern without being overtly obvious to pander to a younger audience.

Lyrically thematic in its dark destruction in the search for purpose in life, the snare sound for Ben Brenner can be hit or miss, as it’s very loud and open in the mix. The growls for "Cages We Create" add an evil picture over the arrangement, while the closing segment keeps things very folk-ish. A drum solo makes "Interlude II: The Dance of Bliss" intriguing, a lot of progressive time work against these brooding guitar passages intensify the next sequence. The trio also explore alternative forms of progressive structures – it can be through an off-time guitar pattern that reverberates through the opener instrumental "Tidal" where Ben’s drumming channels this propulsive tribal march against Rush-oriented tom hits, or lower background chants to build tension for the following aural assault on the follow-up title cut.

Skyliner separate themselves from the progressive/power hordes because they aren’t necessarily going to wow you out of the gate through intricate, technical proficiency. Their skill set and musicianship grow organically due to the individual song needs, where sometimes space gathers better punch for the next twist or salvo. "Condition Black" could be that hidden gem because of the musical stew approach the band favors – as its equally enticing for its worldly influence base as it is the execution.