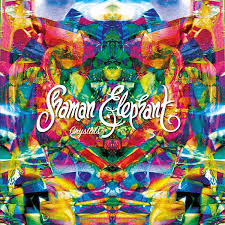 The prog rock scene in and around Bergen is thriving these days, and thanks to Karisma Records I have had the pleasure of acquainting myself with quite a few interesting bands that may be said to either belong to or move along the periphery of the aforementioned genre and scene. Shaman Elephant is no exception and is definitely one of the most intriguing and exciting prog rock bands that I have come across lately. Not being familiar with the band’s 2015 digital EP entitled "More", I had no idea what to expect when I popped this debut album of theirs into the CD player, but I was both impressed and pleasantly surprised by the psychedelic sounds and vibes of a long gone era that manifested themselves in my living room once the majestic title track roared into life, and that particular song pretty much set the tone for what was to follow. Talk about a vibrant, atmospheric, and otherworldly record!

"Crystals" is very much rooted in 70s prog rock and 60s psychedelia, and there is a lot of depth and substance to the six rather long compositions that comprise this varied musical affair. Proto hard rock elements also creep into the band’s lively and dynamic sound, and they add a sense of edge, danger, and intensity to the whole thing. Just listen to that doomy and unsettling riff that opens the fifth track, "The Jazz"! The music constantly shifts from mellow parts to energetic outbursts and further on to somewhat convoluted and improvisational stuff, and the thing is that none of the songs ever drag on or turn into a lifeless pile of poo. There is that constant sense of not knowing what comes next and an element of surprise to the whole thing, and I simply love that unpredictable and shape-shifting nature of the album. The musicianship is strong, and I especially dig the groovy and exciting drumming courtesy of Jard Hole. "Crystals" is a captivating and cleverly written album that ought to appeal to all you lovers of prog rock and psychedelic music in general.