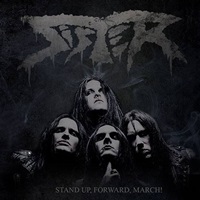 The 1980’s… a period of shaping my music tastes, adolescence and teen years coming together at a point in time when we didn’t have instant communication, the internet, or even access to our record collections at the click of a button. As such, my first experiences in ‘heavy’ music per se were with the burgeoning melodic hard rock movement, as Quiet Riot, Ratt, Mötley Crüe, and their offspring became multi-platinum headliners. Even as my tastes shifted to heavier, faster, and louder metal terrain, there will always be a soft spot for good old fashioned hard rock – which brings us to this record.

The third album from Swedish sleaze hard rock/ metal band Sister, "Stand Up, Forward, March!" keeps the songwriting tight and focused, highlighting sing-a-long choruses and heavy knockout caliber musical hooks. "Carry On" has a little bit more of an acoustic punk-edge to start before turning into an electric, beer hall anthem – but the other 10 songs stay in the typical lanes of Sister’s steady craft: raw, abrasive, and full of testosterone. Between Jamie Anderson’s half punk, half metal vocal penchant and the sick guitar rumblings from Tim Tweak, you’d be hard pressed to not head the album title’s call of command throughout first single "Carved in Stone" and the wah-wah oriented street-level "Dead Man’s Dirt".

Scandinavia has been pumping out this sub-genre for well over a decade now to prove that the 1980’s never went away, no matter what major media or grunge music tells us. Sister are steadily improving their stance, injecting Sunset Strip /pop sensations into a love of Hardcore Superstar, LA Guns, and even a bit of Def Leppard for novel vocal harmony approach. "Stand Up, Forward, March!" puts Sister in a good light the third time around.