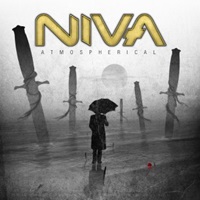 The fifth studio album for Swedish AOR/melodic rock act Niva "Atmospherical" digs a little deeper into a heavier stance to diversify things a bit from previous discography. Perfectly understandable, given drummer/ guitarist Lars Chriss work with Lion’s Share – which is where vocalist Tony Niva teamed up with Lars for 2001’s "Entrance" effort. Fear not fans of Journey, Survivor, Toto, and the like – there is still stirring hooks and commercial-oriented fare like "Forbidden Lover" and "The Mountain" that will satiate those aural desires.

Overall though, songs such as the pulsating "Dressed to Kill" and "Raise Your Voice" fit more in that melodic metal mold, given the aggressive, gritty guitar tone and higher octane delivery Tony chooses to match the proceedings. Even reworking a Lion’s Share song "I’m On a Roll" from their debut single of 1988, the keyboard/ guitar tradeoffs and Tony’s passionate expressiveness make this as important and potent today as when it originally hit the streets 28 years previous.

There’s just something in the wind, the air, and the care of Scandinavian musicians that put their all into the songwriting, the performances, the production, the tones, that makes the final product so killer and memorable. "Atmospherical" will not disappoint the faithful Niva fans, and hopefully gain a few newcomers to the fold- proving once again that even though they may not pull the numbers of 80’s superstars, there’s still a lot left in the AOR/melodic hard rock/ metal tank for musicians in 2016 to deliver. Riff-based Niva has another winner in this record – probably best served for those who desire more Pretty Maids/ Lion’s Share oriented material with strong choruses and tight, focused arrangements.