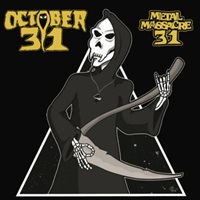 To those who grew up in the 80’s wishing to learn more about the metal underground, the Metal Blade compilation series Metal Massacre would be our sonic soundtrack to discover new artists, especially in the burgeoning traditional, power, speed, doom, and thrash genres. October 31 feels the time is right to put their spin on a lot of those early classics- selecting ten songs from the first seven editions as a tribute to the great bands who made strides in elevating the genre at a creative, fertile period of the movement.

Many will know the names of Omen and Hallow’s Eve the most for their contributions "Torture Me" and "Metal Merchants", but the real deep cuts like "The Awakening" by Titanic and "The Warrior" from Final Warning make this very worthwhile. Vocalist King Fowley has always been a deep follower of the genre first – quality and talent winning out in his world, so hopefully this will make ardent listeners satisfied that these bands get their just respect, as there were many worthy bands that for one reason or another made it past the demo stage in their careers. Canada’s Sacred Blade with "The Alien" fits well into the speedy framework, even if King’s high screams come off a tad paint peeling. Be it talent from IL, HI, GA, CA, or Canada, the scene developed based on love and commitment, not dollar signs or hopes for huge fame. October 31 are one of the current bands who never lost sight of pushing their music based on integrity and honesty – and that’s why "Metal Massacre 31" as a labor of love should also be applauded and given intense listening sessions.

Let’s hope the band churn out a couple of these songs during their fierce live performances along with their originals.