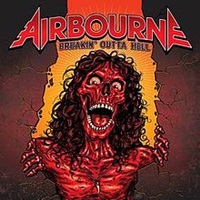 One of the success stories of the modern age of hard rock pertains to Australia’s Airbourne. Taking high energy, quick hitting material cut from the AC/DC mold, they’ve sold hundreds of thousands of albums and moved tickets live globally as people clamor for more, more, more. "Breakin’ Outta Hell" is the fourth studio album, and much like their aforementioned mentors seem content to dish out material that doesn’t necessarily stray from what works best, explosive blues-based hard boogie with catchy hooks on the vocal front and choruses tailor made for large audience participation.

When the band choose to step off the accelerator a bit for "Rivalry", you can hear more of a big arena rock/ Def Leppard-influence, especially in terms of the ‘woah’ multiple background vocals that made "Hysteria" a phenomenon. Joel O’Keeffe knows his gritty, sandpaper-ish charm plus personal inflection twists straddle the Brian Johnson/ Bon Scott deliveries like a glove, making the mid-tempo "Get Back Up" as equally engaging as the higher octane "Thin the Blood" or party fueled "When I Drink I Go Crazy". Living for good times, Airbourne continue to provide the proper in your face sound, stripped down to the bare essence to transport the listeners a solid three to four decades back in time – when albums like "Back in Black", "Highway to Hell", and "High ‘n’ Dry" were the talk of the town.

Favorites change by the day, it’s hard to resist the O’Keeffe/ David Rhoads back and forth lead and rhythm guitar parts on "I’m Going to Hell for This" which level the aural landscape in three-chord glory, and the horns up closer "It’s All for Rock ‘n’ Roll". Now on Spinefarm Records, "Breakin’ Outta Hell" keeps the Airbourne discography clipping along like a steamroller steady down the tracks – sure to appease the masses and hopefully gain more new converts.