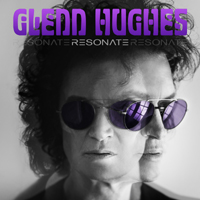 Glenn Hughes is a living legend and a musical icon. The man’s discography is both vast and impressive, and his inimitable voice has graced such masterpieces as "Burn", "Stormbringer, and "Come Taste the Band" by Deep Purple (along with David Coverdale, that is), the stellar "Seventh Star" by Black Sabbath, "Fused" by Iommi, "Run for Cover" by Gary Moore, and…well, do I really need to list all the albums by Hughes/Thrall, Trapeze, Black Country Communion, the Hughes/Turner Project, California Breed, and so on? You get the picture, right? The man rules and has done so for decades! It is as simple as that. Anyway, I have been looking forward to this brand new studio album of his entitled "Resonate" for some time now. Recorded in my native country of Denmark and featuring Soren Andersen (who is also the co-producer) on guitar, Lachy Doley on keyboards, and Pontus Enborg on drums, this exceptionally well-crafted album has turned out to be one of the year’s coolest releases in my humble opinion. Before I forget, Chad Smith (Red Hot Chili Peppers) makes an appearance as well, performing drums on "Heavy" & "Long Time Gone", and he does a great job, I might add.

The album pretty much explodes in your face with the gut-punching "Heavy", which immediately sets the tone and atmosphere of the record. The thing is that "Resonate" is a highly dynamic and diverse album that covers a lot of ground, which is to say that it ranges from bombastic and heavy musical assaults such as the aforementioned "Heavy" and songs such as "My Town" and "How Long" to rather mellow and moody compositions such as "When I fall" and "Let It Shine". Some parts are rather dark and dense while others are more uplifting and groovy, which, obviously, is a great thing.

In some ways, "Resonate" reminds me of the Iommi/Hughes-crafted "Fused" album (2005) in places due to the majestic and bone-crushing riffs, the haunting vocal melodies, and the utterly heavy production. Make no mistake, however; this is a Glenn Hughes album, not a copy of something else, but there are a few parallels to stuff that he has recorded in the past with various bands and musicians. "Stumble and Go" has the same drive that Deep Purple’s immortal "Burn" track possesses while "Landmines" has a bit of that funky and soulful "Come Taste the Band" vibe to it , but there is nothing sentimental or nostalgic about "Resonate" as such. It is current and modern yet timeless and with just the right amount of nods to the past, just the way hard rock of the highest order ought to be.

Not surprisingly, Glenn’s voice is superb and full of emotion throughout the album. He is and remains one of rock’s most unique and versatile singers and musicians. There is this intense and soul-searching quality to his voice that defies words, and if you have yet to find out why Hughes is rated so highly, buy this album and listen closely to how much ground his singing actually covers. The stuff that he pulls off is wonderful to listen to. You want soulful? You want aggressive? You want melancholic? Fear not! You will find all of that and more on "Resonate". The band as a whole sounds inhumanly tight, sharp, and hungry, and the musicianship is just brilliant all around. Also, the lyrics are some of the best that Hughes has ever penned.

I have immersed myself in "Resonate" more times now than your tiny little mind can probably comprehend, and I can honestly tell you that this is one of the strongest releases of the year. Impressive, vibrant, and utterly compelling from beginning to end. This album reigns supreme. Make no mistake about that!