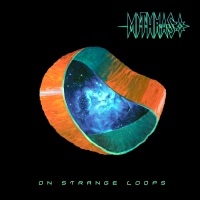 The British experimental brutal death metal band has been silent for a good 4 years since their third album "Behind The Shadows Lie Madness" and even then barely released 2 new song on an EP which are both featured on this new album. "On Strange Loops" took 5 additional years to create and you can actually hear the amount of work put into this record. It is a very mature, if flawed, creation.

The album begins with a strange semi-ambient melodic track that could pass for an instrumental were it not for the vocals as the sole member responsible for all instruments and vocals, Leon Macey, asks that one question nobody really knows the answer to: Why do we live? Quickly, before we have a chance to recover, Macey attacks with the brutal yet melodic "When The Stars Align" for two best tracks on the album, excluding the closer. The following tracks are well-written and flawlessly executed with incredible skill and precision, recalling Morbid Angel "Blessed Are The Sick"/"Covenant" combined with the eerie, cosmic tremolo picking Trey Azagthoth invented and bands like Fallujah made famous among younger generation of metalheads. The tracks are generally in the same fashion until "Odyssey’s End" with a riff somewhat like slower Sepultura’s "Refuse/Resist", plenty of acoustic guitars and ambient keys.

"Howling of The Distant Spaces" made me think of Machine Head’s "The Blackening", "Between Scylla and Charybdis", besides sounding like a Trivium title off "Shogun", also recalled Krisiun for the characteristic technical repetitive riffery, while "Time Never Lasts" (featured on the 2011 EP) features some Gojira-like guitar squeels. These two tracks are, however, among the weakest on the album, joining "Inside The Godmind" (featured on the 2011 EP) which does, however, feature a fantastic seriously heavy slow riff. Mithras offers two interludes, one of which is an accoustic break and the other a 2 minute long staccato of drums leading into the closer.

It is the triumphant closing title track that I found the most impressive, a sprawling epic song reminiscent in structure and character of the closing title cuts on Slayer’s "South of Heaven" or "Seasons in the Abyss", perhaps on purpose. Leon poured his best ideas into it and summed up the entire album with yet another question nobody will ever know the answer to: Why DID we live? The anger and despair in his voice really hit me and it never went away with any application, so credit for that effect.

It’s been a long time but Mithras does not disappoint on their fourth album. It’s not perfect by any stretch of imagination but it is a great honest and engaging work of a very talented and skilled musician whose invention in structure and concept are well worth looking into.