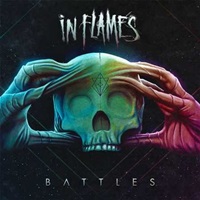 The Swedish melodic death juggernaut who ascended to prominence through classic efforts like "The Jester Race", "Whoracle", "Colony", and "Clayman" have turned to more mainstream, groovier pastures for a solid decade plus since. Which means debate reigns over the evolution of a long-standing group, even in the metal genre, that seems to appeal more to the under 25-generation through the simplification of riffing, hooks, and songwriting principles than what put them on the map in the first place – the push and pull aggression against sweet Maiden-esque twin guitar harmony spots. And it seems with "Battles", things have improved slightly from the disjointed "Siren Charms" – but this will not swing old-timers back in droves, that’s for sure.

Incorporating everything from child-like choirs during the bridge and chorus of "The End", to EDM keyboards and Sevendust-like guitar stomp for "The Truth", In Flames anno 2016 appears to be exploring more of the boundaries to their style, filling in the grey space how they see fit. Vocalist Anders Fridén has a little better grip on the clean to alternative/screaming transitions for these songs, although the occasional use of voice filters waters down the impact of his delivery. One of the highlights for me would be "In My Room", featuring a killer main bass line, the slinky restraint during the verses allowing the heavier transitions to make a more powerful aural explosiveness. Björn Gelotte and Niclas Engelin serve up some great point/counterpart guitar lines, as well as tasty lead work when that comes up – check out "Through My Eyes" and the seven-minute plus "Wallflower" for their diversity in up-tempo as well as doomier/alternative pastures.

"Battles" will not disappoint the throngs who discovered In Flames from 2002 forward – the long-time followers though want a little more diversity and less groove pandering, so steer clear if you are hoping for another "Pinball Map" or "Jotun" on this record.

MARTIN POWER – No Quarter: The Three Lives of Jimmy Page