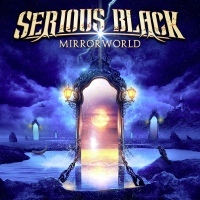 Serious Black’s debut was a pleasant surprise in my ears, solid power metal mostly focused on aggressive melody and effective thought-out choruses while delivering a few AOR bumps on the road. I was curious where they went next: Did they keep up the great choruses, vocalizations, drumming and the melodic aggression of last year’s "As The Dawn Breaks" or have they gone more into the AOR (or as I call it – R&R which stands for rest & recuperation in military jargon )? And why only 9 songs? Well, I am  unhappy to report, "Mirrorworlds" is a serious  step down from the debut (pun intended). I miss Thomen Stauch as Alex Holzwarth’s drums seem dull in comparison. Gone, too, is the powerful balance of Roland Grapow’s production replaced by a softer, more radio-friendly sound to my ears, mostly evident on "Heartbroken Soul" and "Dying Hearts". Even Urban breed’s previously amazing vocals sound phoned in and constipated, as if he aged an eternity since the debut. No, it’s not all bad but seriously uneven (pun intended).

Already the opening "Game of Thrones" score "Breaking the Surface" is over the top (a bad sign) and pointless, though the excellent "As Long As I’m Alive" is an instant pleaser with its ZZ Top-tinged melodic power, while the following Middle East flavored "Castor Skies" recalls a more heavy metal Megadeth, the riffs and melodies conjured up by Dominik Sebastian and Bob Katsionis already at jaw-dropping quality on a 3rd track. Unfortunately, the R&R of "Heartbroken Soul" flirts too boldly with Queensrÿche’s excellent "Jet City Woman", on cringeworthy lyrics (I realize the summer’s over…oh, can you tell me why it’s already over? – season’s change, dude, suck it up) unsaved not even by a great solo, exactly that type of cheese whizz I don’t need to hear on a power metal album. Each track having not merely its own identity but its own sound usually plays in band’s favor, but "Dying Hearts" is another R&R pop fest, another letdown, somewhat metalized by occasional heavier riff, unsaved by a solo. No, I do not hate Arena Oriented Rock as long as it actually rocks, whereas, compared to this, "As Daylight Breaks" sounds like thrash metal, whereas this already halfway down the album strikes you as a sophomore slump.

And again, "You’re Not Alone"  brings back the aggressive 90’s Megadeth melodicism and the fantastic guitarwork, as is the the case in the excellent title track of Def Leppard’s- -like melodic electricity and AOR we can believe in, and the fast tempo of "State of Despair" gives one last glimmer of hope, but the song seems flat despite a few faster and heavier parts. "The Unborn Never Die" brings back the joy, probably the best track on the album with a fantastic melody and even some unexpected progression in the middle, to say nothing of spectacular Sebastian/Katsionis work, but the game is over. Just two more tracks (equaling the debut in number) like these and this could have been a different review, but instead it’s over. Fuck you and goodbye. At 36:04 playtime. Are we Slayer?

Whenever I see a sophomore album that has fewer tracks than the debut I always predict a dud (especially if it was released very soon thereafter) because it usually means the band rushed the new material to ride it on the coattails of the debut’s success. While I am not accusing Serious Black of a Dieter Bohlen marketing ploy, why bands choose not to wait for at least 2 years with a follow up to allow all songs to mature and evolve is a mystery to me. In rare cases it works (80‘s Megadeth, 90’s Edge of Sanity, In Flames and Dark Tranquillity) but it didn’t quite work for Trivium with the constipated "The Crusade" right after the phenomenal "Ascendancy" and it was a lot longer than "Mirrorworlds"). Next time, how about we go into the studio when we’re fully ready?