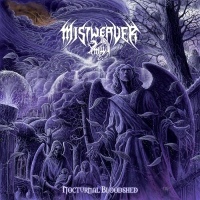 The Spanish ensemble Mistweaver appears out of nowhere but this is their fifth full length in the 17th year of existence. They play evilly blackened symphonic death metal with plenty of melody and some of the best guttural vocals since Michael Akerfeld turned on the microphone. The musicianship and songwriting is beyond excellent and there’s solos, hooks and headbanging moments for every member of your family age 2-100, with the dual harmonies of Raúl Weaver (coincidence?) and Eduardo Alonso Santos easily competing for the melodeath throne of duals. This is what melodic death metal should sound like thanks in no small part to David De Pedro Mediavilla’s bass: heavy, huge and evil as Donald Trump’s legal team.

Right off the bat, the "The Birth", a very necessary intro, where Joaquín Velasco Navarro just begins to tease you with spectacular keyboardry, whets your appetite for my favorite "The Biggest Threat" I played times immemorial in my car back in 2015. "Pandemonium" surprises with operatic female vocals and near power metal structure but is still largely death metal with slight hint of early Morbid Angel in the background riffs, while Dimmu Borgirian in melody. The song is grandiose and is just as fantastic as it’s predecessor while the melodic fills very melodeath in "sweetness". "Hell’s Arrival" heavily if briefly cites "The Jester Race" in the vein of Unleashed or Dismember only drenched with awesome melodies like Edge of Sanity without the clean vocals (3:43 mark). In vain I listen for one unnecessary note. Where the hell did these guys come from, I exclaim and realize the answer lies in the question.

"God Is Dead" is melodeath with the chops and talent of Cradle of Filth from "Cruelty and the Beast" (2:10 mark), while the title track flirts with Emperor failing neither the power nor catchiness, with a gorgeous acoustic break around 2:39 mark and whispered vocals that give way to another fantastic melody that gives way to another fantastic melody (not a typo) that bursts into a heavy ass downtuned riff and violin symphonic pick up with Ramon Múr’s ferocious drumming for the brief revisitation of the main motiff dressed in an acoustic outro in a tip of the hat to old Opeth. "Perpetual Darkness" begins like the album "Anthems to the Welkin at Dusk" with spoken/whispered verses and gargantuan chorus complete with bells, all of which still catchy as flu from the government pushed vaccines. "End of Times" is a gothic metal female vocalization led tale of upcoming death and destruction sung in a tone of a blessed merciless inevitability. After a while the guttural vocals of Raúl Weaver join in and the two form a duo whereby the guitars pick up for an epic slow blackened melodic bliss and a jaw-dropping solo with just as unbelievable fill melody. It is the slower song on the album, Mistweaver masters of harmony and pace, that leads off to the final "Deceiver’s Fall" apparent instrumental turned midpaced Hypocrisy with more progressive edge and ebbs and flows more akin to old Opeth. This is the most progressive song on the record as you realize this fabulous album is about to end and it is precisely at this moment that it does. Feel free to press "play" again, you know you want to.

Mistweaver is one of those bands that not only does everything right on "Nocturnal Bloodshed" but gives you the maximum value in every single song. The solos, riffs, fills, melodies, breaks and ideas should be studied in the pursuit of creating of a "how to make a perfect melodeath/black metal record using tools of traditional trade without sounding retro" music manual, my number one for the year 2014 and had it come out in 2015 it would have been that year’s number one. You need this like the desert needs the rain. Mistweaver don’t even think about breaking up. Ever